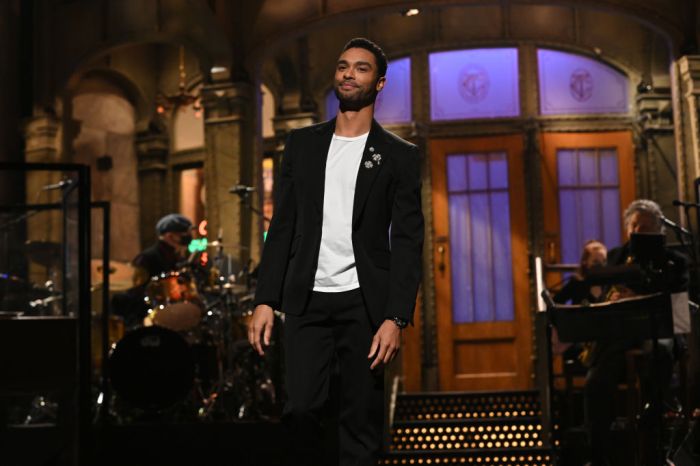 The British actor opened up his monologue by acknowledging his show is the one you turn to your mom and say “You know what, never mind, I don’t think we should watch this together.”

“It’s a bit of a racy show,” Page admitted. “And because of that, people may associate me being this smoldering, sexual smoke show. But I assure you, I’m just a regular guy.”

Page continued cheekily, “I’m here to show you a good time and explore each other. Does that sound fun to you?”

Page actually wasn’t alone for most of his opening monologue, with “SNL” comediennes Aidy Bryant and Ego Nwodim vying to be his on set personal liaison. Bryant begs Page’s pardon, noting she is a big fan of his and of “Bridgerton” noting “And I’ve seen your bottom.”

Page interrupts the women’s excitement, noting that Simon Basset is just a character and adding, “I’m actually a nerd. I nerd out on music. I nerd out and sing songs.” He then launches into song, singing “Unchained Melody” as the audience screams in approval.

Page, Bryant and Nwodim are later joined by fellow SNL actress Chloe Fineman, dressed like Regé Jean’s “Bridgerton”co-star Phoebe Dynevor who plays his love interest Daphne Bridgerton. He teases her about dressing up before continuing to try to distance himself from his “Bridgerton” role, noting he’s been acting for awhile and was even in “Roots”. Thanks to the success of his Netflix show though, Page says people now want him to be the guy who says things like, “I burn for you!” (Yes, an actual line from the show.)

Check out the sketch below:

Ahead of his appearance Saturday, Page took to his Instagram story to share a sweet note left behind by Regina King, who hosted the variety show last week.

He shared a photo of himself sitting in his dressing room with the note from King stuck to the mirror. The note reads,

Page captioned the photo: “Thank you @iamreginaking. The feeling is very mutual.”