In the wake of the insurrection at the Capitol, a national Three Percenters group—part of a sprawling network of militia groups—took a long, hard look in the mirror, and didn’t like what they saw.

So they’re breaking up. This week, they announced the dissolution of the “Three Percenters National Council.”

“The DC riots and Capitol breach has hurt the patriot movement drastically and as a result brought an end to our organization,” they wrote in a statement. “It’s quite unfortunate that we’ve come to this.”

The Three Percenters, founded in 2008, derive their name from the inaccurate claim that only three percent of Americans fought and ultimately overthrew British forces during the American Revolution. The godfather of the movement, Michael Brian Vanderboegh, a veteran of the militia movement, advocated the idea that a similarly-dedicated group of “patriots” could come together and overthrow a modern tyrannical government (notably, the birth of this movement coincided with the election of Barack Obama).

Since then, the Three Percent movement has mushroomed, inspiring formation of local chapters, which have since splintered into even more radical factions. Mark Pitcavage, an expert with the Anti-Defamation League who has tracked militias for decades, counted at least 330 Three Percenter groups that were active between 2016 and 2019. And over the years, adherents of the movement have been linked to bomb plots, armed standoffs, racist social media posts—and most recently, the Capitol riots. 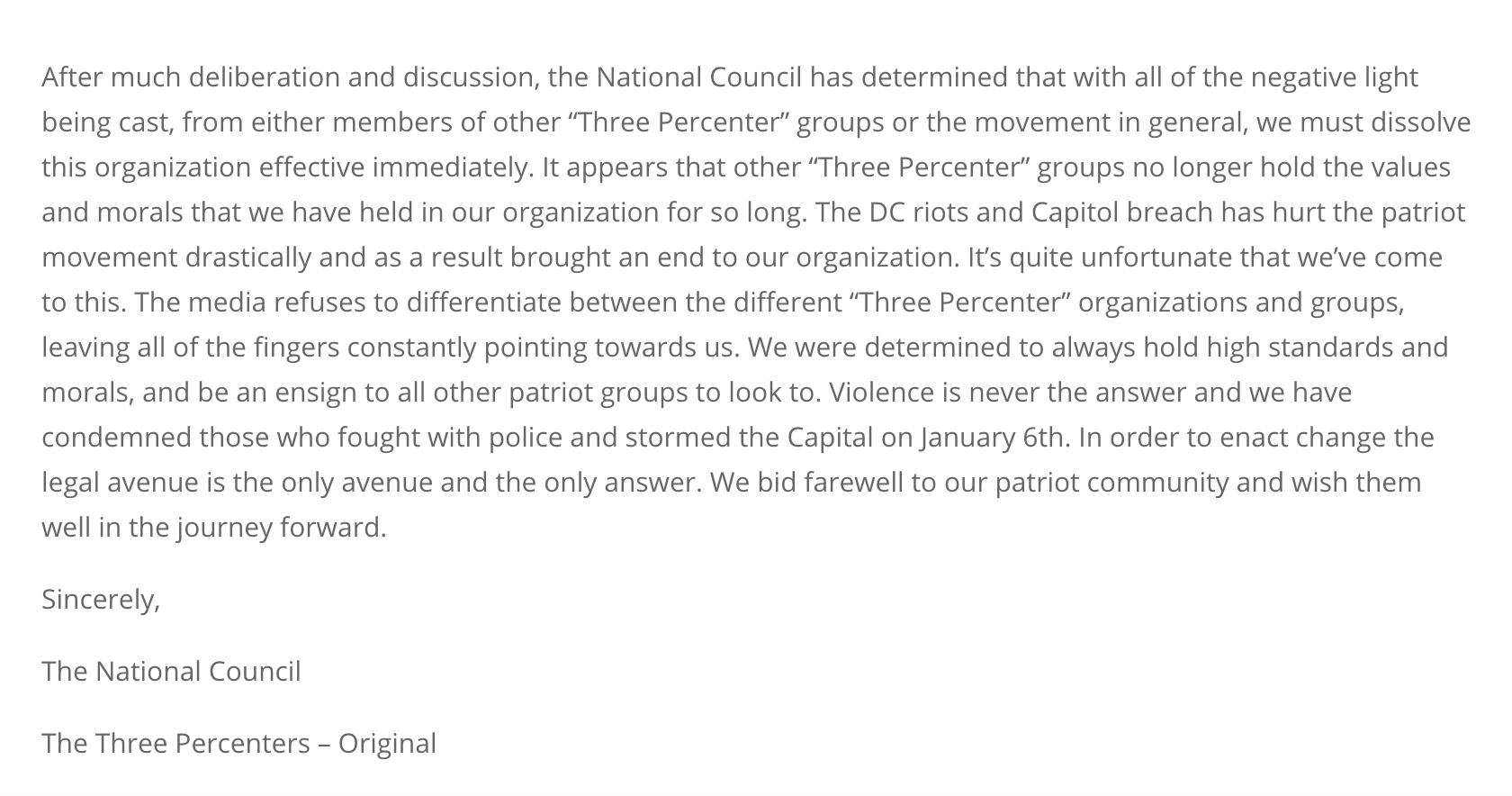 The national Three Percenters chapter came together in 2011, spearheaded by Kaleb Hill, an Iraq War veteran from Mississippi. In an interview with Ammoland, a gun industry publication, Hill said that he liked the Three Percenter philosophy, and was motivated to start a Facebook page for like-minded individuals in Mississippi. He was pleased by the success of that page. “I thought, ‘I should take this national’ so I deleted the Mississippi part and made it our national page,” Hill told Ammoland.

The national group fancied itself as a sort of motherboard for various Three Percenter groups and chapters around the country. At one point they claimed to have 12,000 members in their Facebook group, from all 50 states (though as Pitcavage notes, Facebook group membership is almost never an accurate reflection of committed, active participants.)

They bought the TheThreePercenters.org domain. And for a while, this meant that this group got to set the tone for the rest of the movement, even if they had little to no coordination with the majority of other groups or chapters. When reporters wanted to get comment from Three Percenters for a story, their website was the first thing that would come up, said Pitcavage.

“This particular website gets referenced whenever any Three Percenter ends up in the news for something,” said Pitcavage. “They are saying that the actions of all these other Three Percenters reflects badly on them and gives them a bunch of negative attention and scrutiny.”

The “blog” section of their website, these days, seems to be entirely devoted to putting out fires or producing “statements” on incidents that have implicated a Three Percenter or the ideology (for example, a thwarted bomb plot targeting a bank in Oklahoma City in 2017). After the deadly Unite the Right rally in 2017, Three Percenter National issued a “stand down order” to members of the movement who had acted as de facto security to the neo-Nazis and white supremacists who’d rioted in the streets of Charlottesville.

And compared to others in the movement, Hill’s public commentary has tended to trend more moderate and optics-conscious. While Vanderboegh’s writings advocating for violence have galvanized Three Percent leaders, and even inspired real-world violence, Hill has tried to distance himself from the movement’s ideological godfather, who died in 2016. During an uptick of armed protests and threats from Three Percenters in 2015 targeting Muslims and lawmakers, Hill told Associated Press that he didn’t share Vanderboegh’s “extreme ideology.”

And yet, in his interview with Ammoland a year later, Hill said that the reason he started his group was because he “really liked the ideas behind the 3%”—which are, definitively, anti-government. (A representative from their now-defunct group told VICE News that Hill left a while ago, and declined to comment further.)

Since the Capitol riots, which left five dead and hundreds injured, the militia movement has been under close scrutiny from lawmakers, prosecutors and press. Ten members of the Oath Keepers, another large militia network that began during Obama’s first term, have been arrested and charged (nine of those defendants are facing conspiracy charges). At least five more individuals arrested in connection to the Capitol violence have ties to the Three Percenters.

“We must dissolve this organization effective immediately,” they wrote in their statement. “It appears that other “Three Percenter” groups no longer hold the values and morals that we have held in our organization for so long.”

VICE News attempted to reach leadership with the now-defunct Three Percenter National group, and either received no comment or no response.