As opening statements proceeded on Day One of the trial of Derek Chauvin, the former Minneapolis cop accused of murdering George Floyd last May, protesters outside the courthouse downtown said they don’t have much faith that Chauvin will actually be convicted.

“It’s clear and apparent justice might not prevail due to the cages and police with big guns—they hand-chose these jurors,” Minneapolis resident Jonathan Mason, 34, told VICE News. “Just because they’re Black jurors doesn’t mean anything. All they need is one person to say no. Are we looking at an acquittal? Are we looking at a hung jury? I think so.” 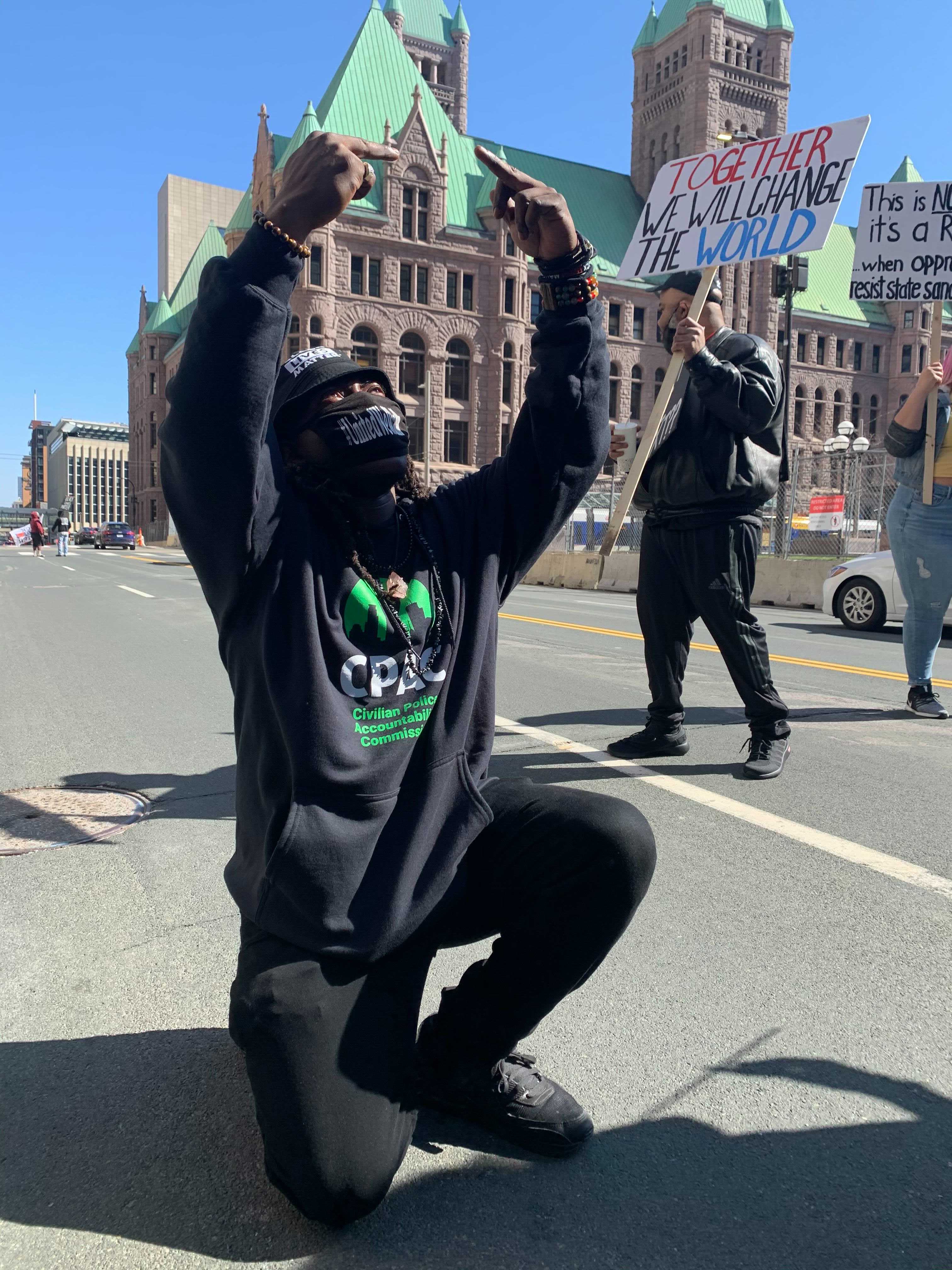 Global Radio | Worldwide Radio Station | 45000+ Radio Stations from 230+ Countries
Cortez Rice, 31, kneels in defiance of a helicopter circling over the Hennepin County Government Center on Monday, March 29, 2021. Rice said he was a family friend of George Floyd’s, and that Floyd would be happy he created a racial justice movement.(Samir Ferdowsi/VICE News)

After two weeks of jury selection, arguments in the case began Monday morning at the Hennepin County Government Center. As attorneys made their cases, around 20 protesters started gathering outside, against a backdrop of $646,000 worth of high-security fencing and barbed wire that was installed before the trial. The militarization of downtown Minneapolis speaks for itself, they say—in other words, that Floyd won’t get a fair trial.

“They try to put this message in our face of, ‘There are four Black jurors, so we’re going to get the justice Black people deserve,’” said 31-year-old Cortez Rice, who’s a member of several local activist groups and said his whole family was close to Floyd. “That’s a smack in the face, is what that is. Why then did you put a million dollars into militarizing our streets? You’re putting millions of dollars into protecting this building, but what about our people?” 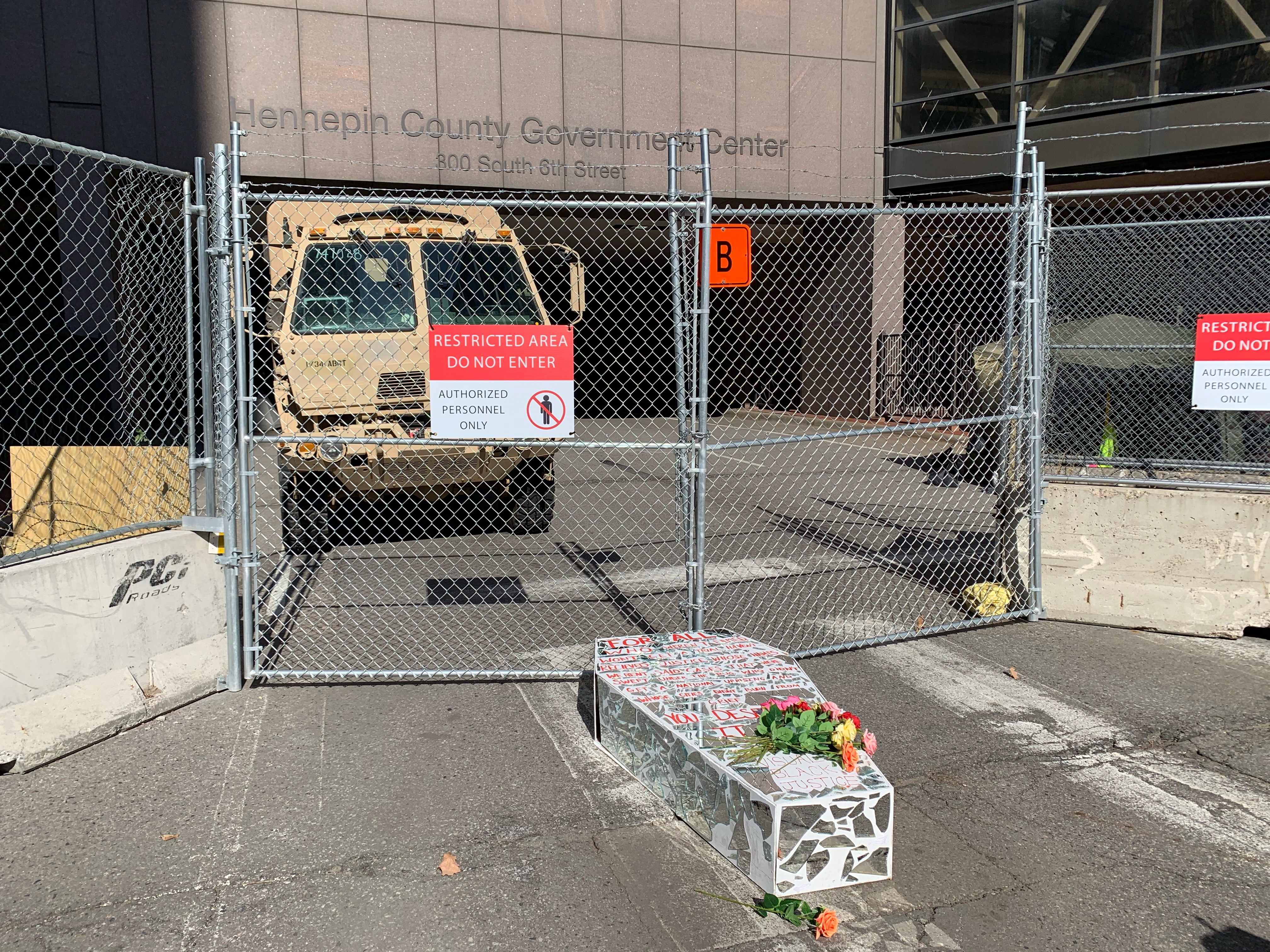 A wooden coffin encrusted in mirror shards sits outside the Hennepin County Government Center on Monday, March 29, 2021, as opening statements in the trial of former officer Derek Chauvin got underway. On one side of the fence is the coffin with a written tribute to those who have died at the hands of police without seeing justice. On the other, a National Guard armored truck. (Samir Ferdowsi/VICE News)

The jury consists of four white women, two white men, two multiracial women, one Black woman, and three Black men. Several potential jurors were dismissed for showing too much support or distaste for the Black Lives Matter and Blue Lives Matter movements. Although no one was explicitly dismissed because of their race, experts told VICE News it’s impossible to divorce the issue from the trial of a Black man killed by a white cop.

“The racism is so systematic, and I don’t want to make it a Black and White issue, but you have to—what else is it?” Minneapolis local Chaz Neal, 40, told VICE News. ”Is it you just don’t like me? All we’re doing is trying to get justice peacefully. What’s so wrong with that?” 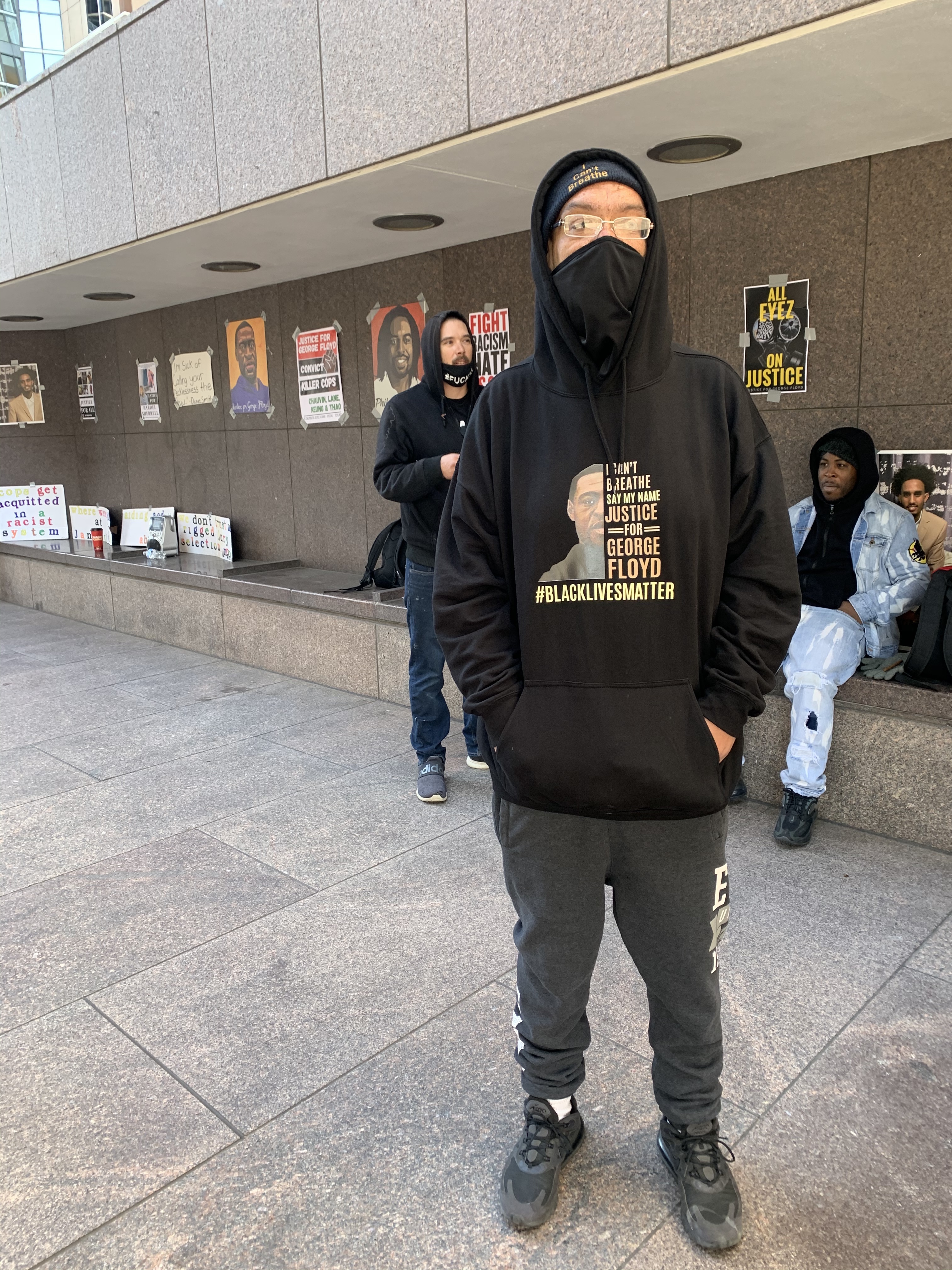 Chaz Neal stands with other Black Lives Matter protesters on Monday, March 29, 2021, across from the courtroom where former Minneapolis police officer Derek Chauvin is on trial. Protesters have decorated the surrounding area in downtown Minneapolis with memorials to people killed by police violence and art condemning systemic racism. (Samir Ferdowsi/VICE News)

Neal said he, too, is expecting a hung jury and, in turn, is ready to continue his demands for justice and systematic racial change. He was already arrested last week for allegedly impeding traffic outside the courthouse when he reacted to being called a racial slur during a protest on the second day of jury selection.

READ:  Are We Ever Going to Find Out COVID’s Origin? History Has Some Clues.

As Neal and other protesters stood in the street outside the courthouse where Chauvin is on trial, the music of Tupac and other hip-hop artists rang from a Bluetooth speaker directly pointed at the National Guard members and their armored vehicles across the road. The Guards’ stood with their arms laid across their rifles, and police officers stood nearby.

During opening arguments on Monday, the attorneys made it clear that how, exactly, Floyd died last May 25 will be at the heart of Chauvin’s trial. The prosecution, which spoke first, noted that while Floyd did have heart disease and fentanyl in his system when Chauvin kneeled on his neck, the medical examiner determined Floyd’s death was a homicide—that is, caused by someone else. 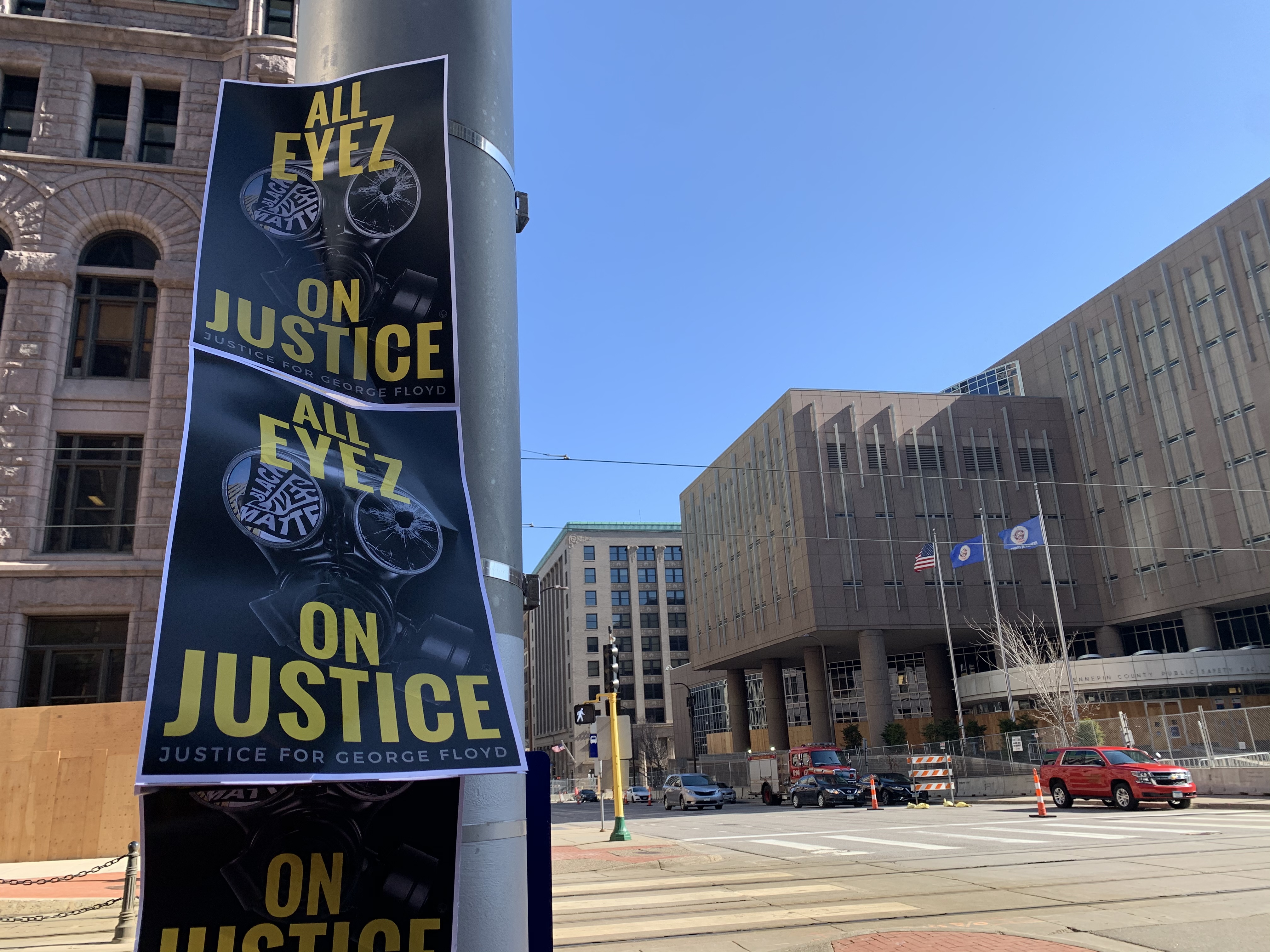 Signs denouncing police brutality and demanding justice for George Floyd flutter around Minneapolis on Monday, March 29, 2021. Signs with messages like these can be found all around the courthouse, the city, and surrounding areas in Minnesota. (Samir Ferdowsi/VICE News)

The defense, however, pointed to a cardiac arrhythmia caused by hypertension, an excess of adrenalin in Floyd’s system because of a heart tumor, and the drugs in his system.

“I think there will be malfunctions in the process that shows they’re trying to help the officers out, and if that happens, these blocks will be jam-packed,” Mason said. “It’s going to be wall-to-wall, and if they are found not guilty, just prepare to be here all summer. We’re going to be here shutting it down.”

Chauvin is facing up to 65 years in prison for second- and third-degree murder charges as well as second-degree manslaughter. Recently, the city reached a historic $27 million settlement with the Floyd family—an amount so large the city had to rearrange funding afterward. Two jurors, in fact, were dismissed after admitting they couldn’t be impartial after learning of the settlement—even though the jury is supposed to be sequestered and not reading any media coverage.

“We’re going to continue to stay out here and push for change against police, and he’s happy, he’s smiling,” said Rice, who plans to protest as much as possible throughout the trial, which is expected to go on for about three weeks. “This is everything that he [Floyd] wanted. He wanted brothers and sisters to come together.”