Maximilian Yates is one of the many residents of my increasingly-sprawling rental empire in The Tenants, an early-access “landlord sim” that combines the resource management inherent in any game about managing properties with the building and decorating from The Sims franchise. Maximilian doesn’t like me much. I don’t blame him.

For one, I keep raising his rent. For another, the one and only time he had a request for me, I ignored him. He had sent me a text message about there being a rat infestation in his apartment when I was busy renovating another place. Whenever a tenant has a request like that, you usually have an option to either pay a little cash to send in a professional, or to “send your uncle.” If you opt for the latter, you play a little mini-game that usually ends with you repairing the electricity, or spraying the bugs, or killing the rats, and the tenant improves your relationship with them. 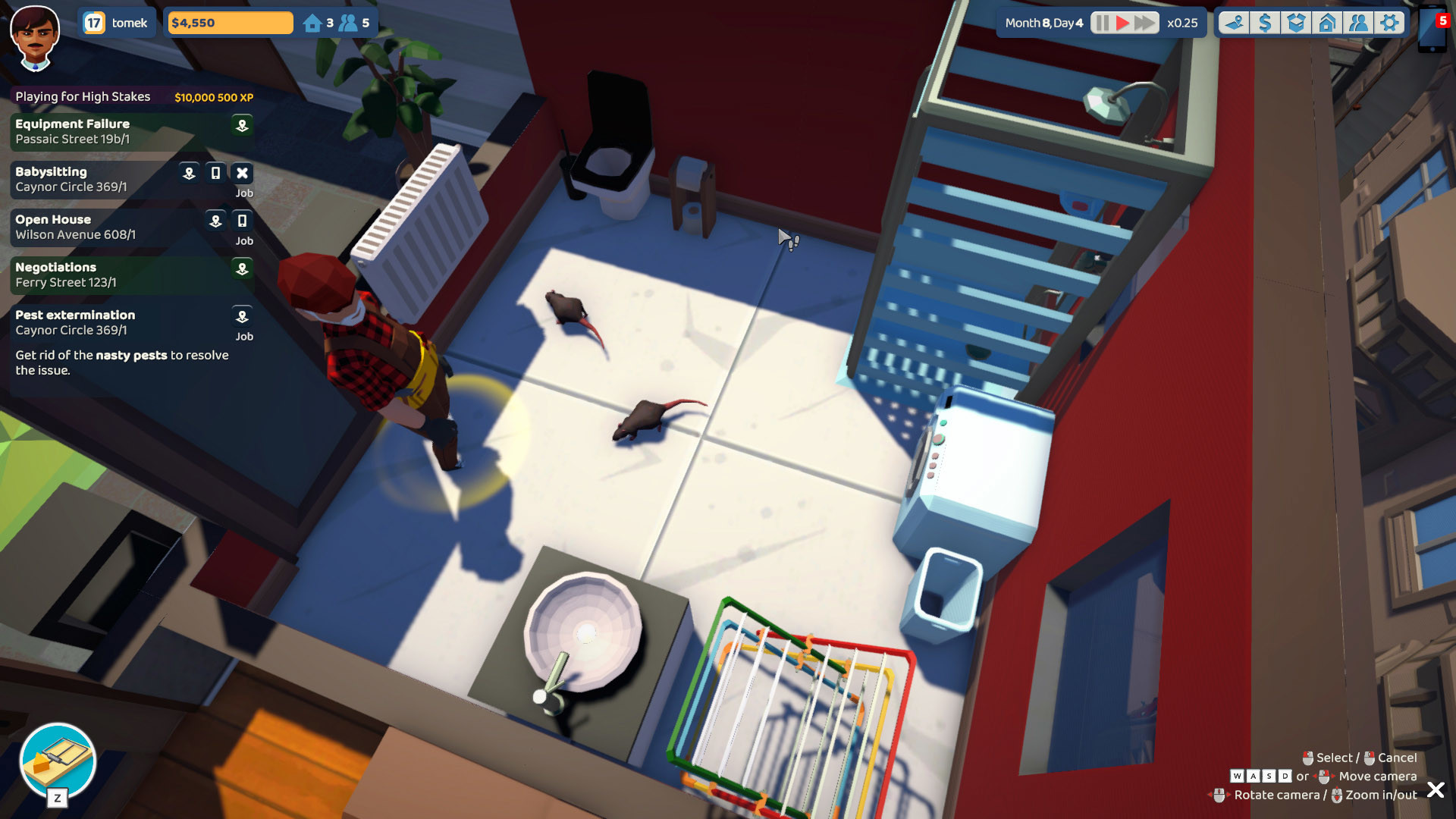 You do have the ability to pause jobs to go and deal with your tenants, but I was on a roll when Max texted me. I figured I’d send over my uncle once I was finished renovating. A little while later, I got another text from Max, saying that he understood that my silence meant that he was on his own.

I clicked on the icon for my phone in the upper right hand corner of the screen, clicked on the text message thread between Max and I. I wanted to send a message of apology or explanation. That wasn’t an option for me. The only messages you can send to tenants are ones relating to money. You can ask for rent, either in a nice or mean way; you can forgive any debts that they may have incurred; or you can end their tenant agreement. It makes sense from the point of view of a landlord. Maximilian Yates is little more than an avatar that helps me make money in The Tenants. But if we’re invested in the fiction of the game, that also means that he’s a human being with a relationship to me, his landlord, who is giving him a place to live. He deserves to have a rat free home, and an apology from his landlord. Instead he got a message about rent being due.

I’ve thought about ending Max’s lease a couple times now. He isn’t a bad tenant by any means. If anything, as a landlord, I’ve failed him. But I do want to renovate his apartment again. And maybe find someone to rent it who will pay me a little bit more.

The Tenants is a fun game, and one clearly made with a lot of passion for the genres it’s straddling. You can tell this by the details, right down to its pale blue menus for renovating apartments, which evoke the same soft edged icons from the first Sims game. The music is even a Mark Mothersbaugh-esque soft jazz, just like the Sims franchise, or the “needs” that each tenant in your apartments must fulfill, just like Sims have. But this game, unlike The Sims, is not about the strange puzzle of humanity. If anything it’s about the puzzling inhumanities of being a landlord.

Published by Frozen District, who also publish the House Flipper series, this game takes a lot of cues from its cousin in this genre. In House Flipper, the main characters of the game are the houses that you redevelop into new, more attractive forms, a la the various shows on Home and Garden Television that portray this kind of business venture. You don’t have to even think about the problems inherent in buying run down houses in neighborhoods full of rundown houses and then making them too expensive for people in that neighborhood to buy. You don’t even see another person. House Flipper is a zen exercise in tearing down or building up walls, tiling and painting them, taking something that was once full of roaches and garbage and turning it into something pristine and new.

What I keep coming back for is the renovation aspect. Radically altering a space by adding and removing walls is fun enough for someone who likes to build Sims houses for fun. Doing that while navigating the interests and limitations of your clients is just as mesmerizing as it is in House Flipper. In The Tenants, each client has a specific request—a new bedroom for a new kid, a fancier kitchen, a complete rehab to turn this apartment into a restaurant—and required and optional furniture to add to the space. Each client will have areas they pay special attention to, and others they ignore. One client could care a lot about the decor and not mind the walls, while another might care a lot about the walls, and not that much about the furniture. 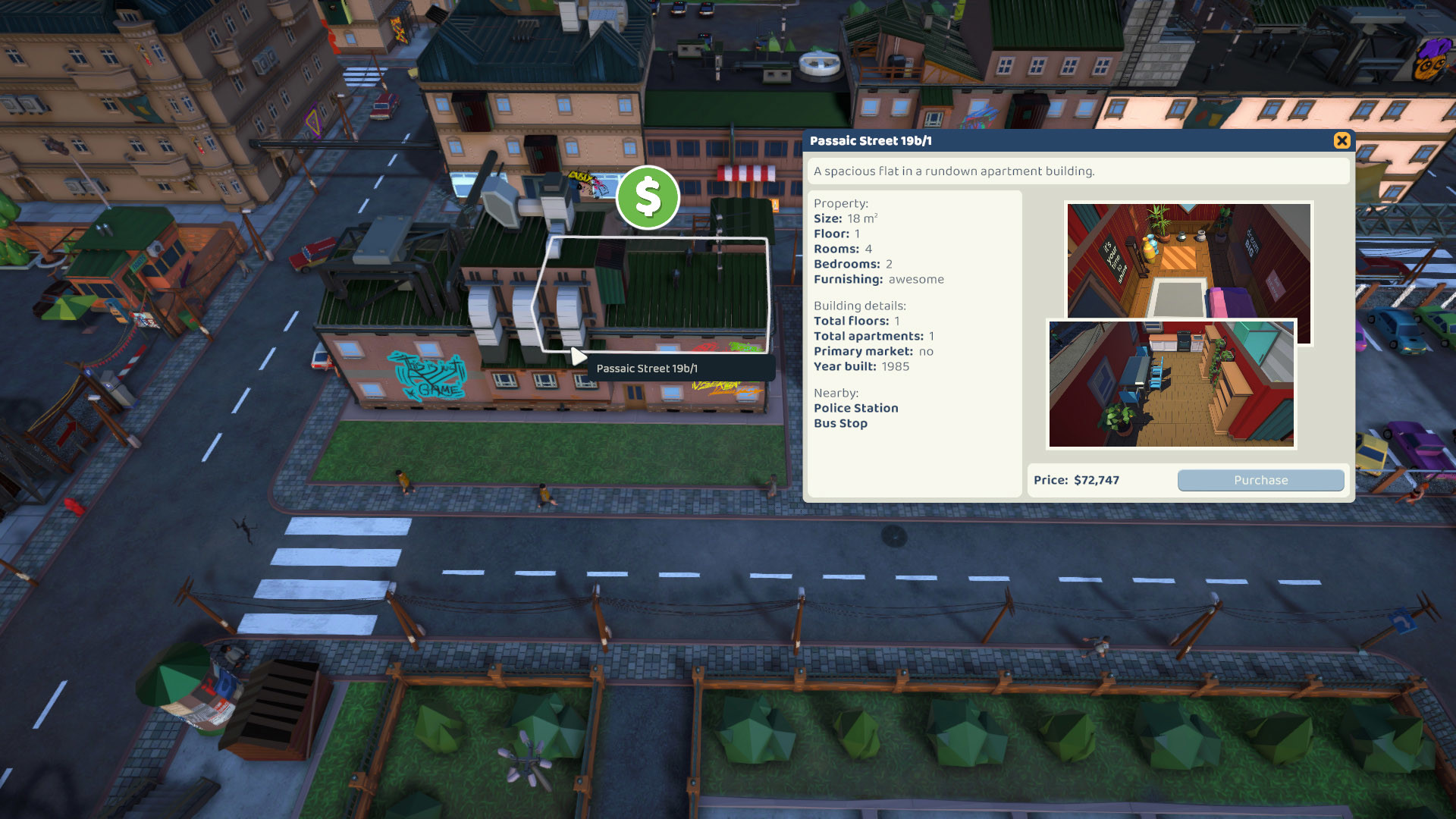 The Tenants takes the renovation aspect of House Flipper and recreates it in miniature. In the game, you play as an up-and-coming landlord, taking on odd jobs renovating rooms and apartments for various clients. As you hold open houses for other people, renovate their bathrooms, and manage their tenants while other people are away on business, you’re building up capital to buy and rent out your own properties.

Each request only takes ten to twenty minutes to complete, making it all the easier to chain renovation job into renovation job, earning money hand over fist. But the game has other tasks for you to handle in the midst of painting walls and arranging furniture. As you gain properties and rent them out, you also have to handle requests for repairs from your tenants, and make sure they’re paying their rent on time.

It’s here that the game’s unreality becomes clear. I’ve rented a lot now, living as I do in New York. I’ve rented from a family who lived in the apartment downstairs; I’ve rented from huge corporations. In The Tenants, there’s this idea that as a landlord, you’re responsible for delivering to your tenant a personal touch. They really do feel like clients, like people I need to sell a service. You, as an individual, field all the requests for repairs and questions from tenants, while building up a humble empire. 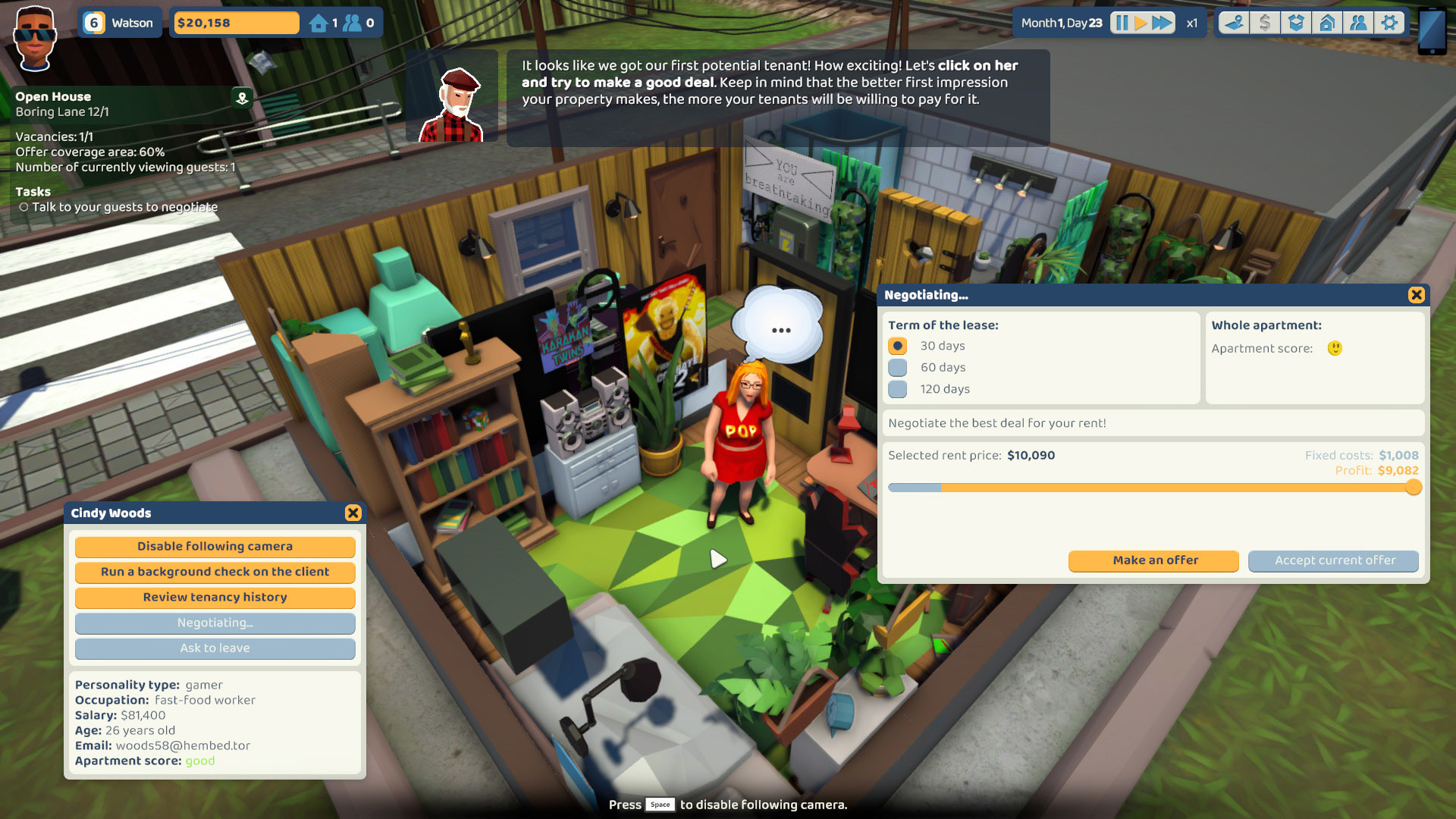 When I rented my current apartment in real life, I noticed during our first viewing that it was full of flies. I asked the realtor, who was representing our landlord, who is a member of an LLC to manage this and other properties. I asked if the apartment would be cleaned, and the realtor said yes. On move in day, it was clear that it hadn’t been cleaned, and my cat feasted upon fly carcasses until I swept them all up. Our fridge, too, leaked water on the ground and on our food. Soon we’d discover that our windows were so drafty that our monthly electric bill shot up to $300, $400 in the winter.

Our landlord has made some perfunctory repairs, and months ago promised us a new fridge, which we still don’t have. But we can also hear the construction being done in the basement of this building, and know that this LLC recently bought another building. Our actual presence here is immaterial to our landlord. We literally just need somewhere to live, as all human beings do. It would be nice to think about my landlord as an individual person amassing capital for their business, but that’s not even the reality of this business. We are renting from an LLC that mostly needs us to pay rent on time and not complain. I mean, what are we going to do if we hate living here? Move? It would cost multiple times my monthly rent to secure a new lease and move all our things across town. Besides, we have a backyard in New York, this apartment would be filled in the same afternoon we left it. A halfway-decent place to live sells itself.

But not in this game. Holding an open house in The Tenants is the most nerve wracking part of the game by far. Time passes in the game in a way that I haven’t yet gotten a handle on. Sometimes, it seems like a day could last forever; other times, a day passes without me even thinking about it. Open houses by default last for three days, but I always feel like I’m trying to rent out my properties before everyone leaves.

In The Tenants, once a potential renter comes to your open house, you have the ability to click on them and pay for their tenant history, which shows you what their previous landlords thought of them, as well as a background check that will tell you if they’ve committed any crimes or have any debt. As a landlord in this game, I only ever really look out for the crimes, which for some reason are almost always felonies. “Rape” comes up on my background checks surprisingly often. I don’t rent to those people, and then for all intents and purposes they disappear from the game.

When you do select a tenant, you have the ability to negotiate a price with them. Tenants will always bargain pretty hard, sometimes offering five hundred or more dollars below the asking price for an apartment. It feels like this is the only way to show the player that tenants don’t need you, that they have leverage. I have actually had a tenant in this game terminate their lease because they didn’t want to pay as much as I was asking for when we re-negotiated their lease. But I know from living in the world that trying to bargain on rent is just a fancy way of having your application rejected. Where do the tenants who reject my leases go, exactly? Where are they spending their nights?

As a game with systems to navigate, the ways that The Tenants tries to portray the system of renters and landlords as fair and easily navigable make the game seem like a cruel joke. You have to change too much about the imbalance of power between renters and landlords to make it into a game that’s satisfying to play. It’s a fantasy where landlords have to work hard for their customers, and renters have lots of choices. It’s nothing like the real world, where landlords have all the leverage, and renters have to live in decaying homes on the crumbs they leave behind.