People who attended a private Catholic high school with Dominic Pezzola remember him as an “aloof, angry guy” who regularly picked fights at parties, and was always slouching in his chair.

That was more than 25 years ago. Now, word is traveling quickly through the alumni community from The Aquinas Institute in a suburb of Rochester, New York, that their former classmate was the wild-eyed man seen smashing the window of the Capitol with a riot shield during the deadly January 6 insurrection.

Through interviews with former classmates and reviewing archived social media and VICE News has identified Pezzola, now 43, as “Spazzo” a member of the Proud Boys who is wanted by the FBI for his critical role in the breach that occurred on Capitol Hill. Federal prosecutors filed an indictment against Pezzola on Wednesday. The documents surfaced on Friday.

“Out of everyone in our class, I would have picked him out as a domestic terrorist,” one classmate, who asked to remain anonymous for her safety, told VICE News. “He was always a bit machismo,” remarked another, who had the same request for anonymity.

Pezzola joined the marines after high school, those who knew him said. He now runs D Pezzola Flooring and lives with his two daughters and long term girlfriend.

Many years later, Pezzola joined the Proud Boys, a far-right street-fighting gang known for street brawls, misogyny and machismo. The Proud Boys, who usually turn out en masse in their trademark black-and-yellow uniform, have been linked to several acts of violence at pro-Trump protests in Washington D.C. But on January 6, Pezzola and the rest of the Proud Boys were “incognito”—dressed in plain clothes—with the goal of blending in with the crowd. Pezzola, aka Spazzo, was wearing an inconspicuous grey coat, and an earpiece tucked behind his long hair. 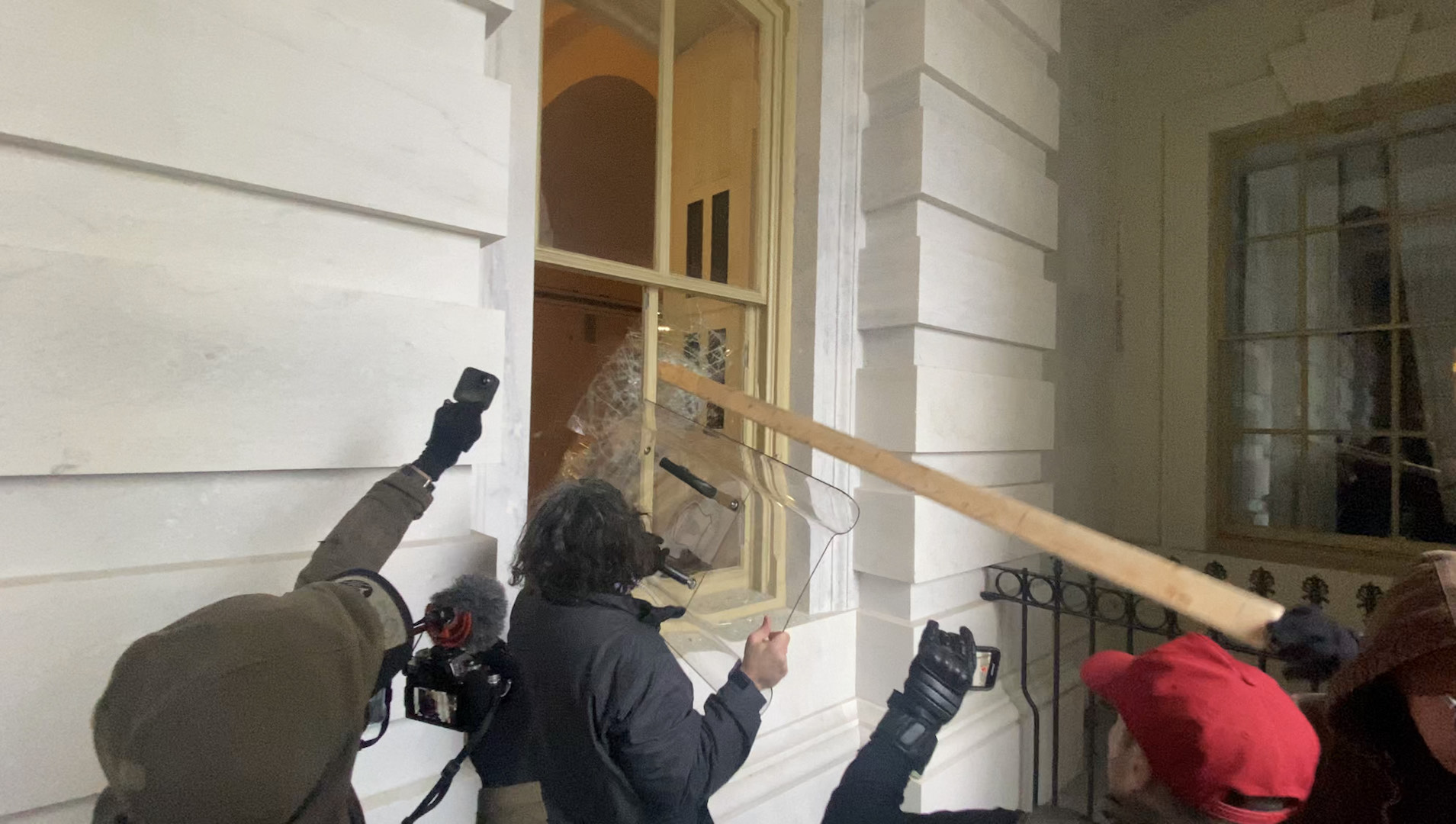 Back in 1995, when Pezzola was a student, Aquinas was the only school in the U.S. with a boxing program. Pezzola’s former classmates described him as a “talented boxer” —and he met Mohammad Ali, who paid a visit to his school when he was a senior.

“It was a proud experience for many of us, and made a lot of us think about social issues,” said one former classmate. “It’s weird to see a kid involved in that turn hard right. And disappointing to me, emotionally.”

One person who has known Pezzola for over 20 years described him as a hard-working father of two daughters whose politics grew increasingly extreme over the last two years.

“I never saw the crazy side of him. I actually saw a decent person with compassion and a good heart,” they told VICE News. “I mean obviously that was before anything political took off.”

Fom the Aquinas Institute class of 1995 yearbook, courtesy of a former classmate.

Since the time of the riot the social media profiles and photos of Pezzola and his family appear to have been removed. One of the few still viewable online is a cached Twitter account Pezzola made under his real name, @DominicPezzola, which featured an avatar of Trump giving the middle finger. The Twitters bio simply read POYB, an much used acronym of the Proud Boy slogan “proud of your boy.”

During the riot, Pezzola posted a video to Telegram from inside the Capitol, in which he speaks directly to the camera while smoking a cigarillo. “I knew we could take this motherfucker,” he says in the video. “Proud of your motherfucking boy.” 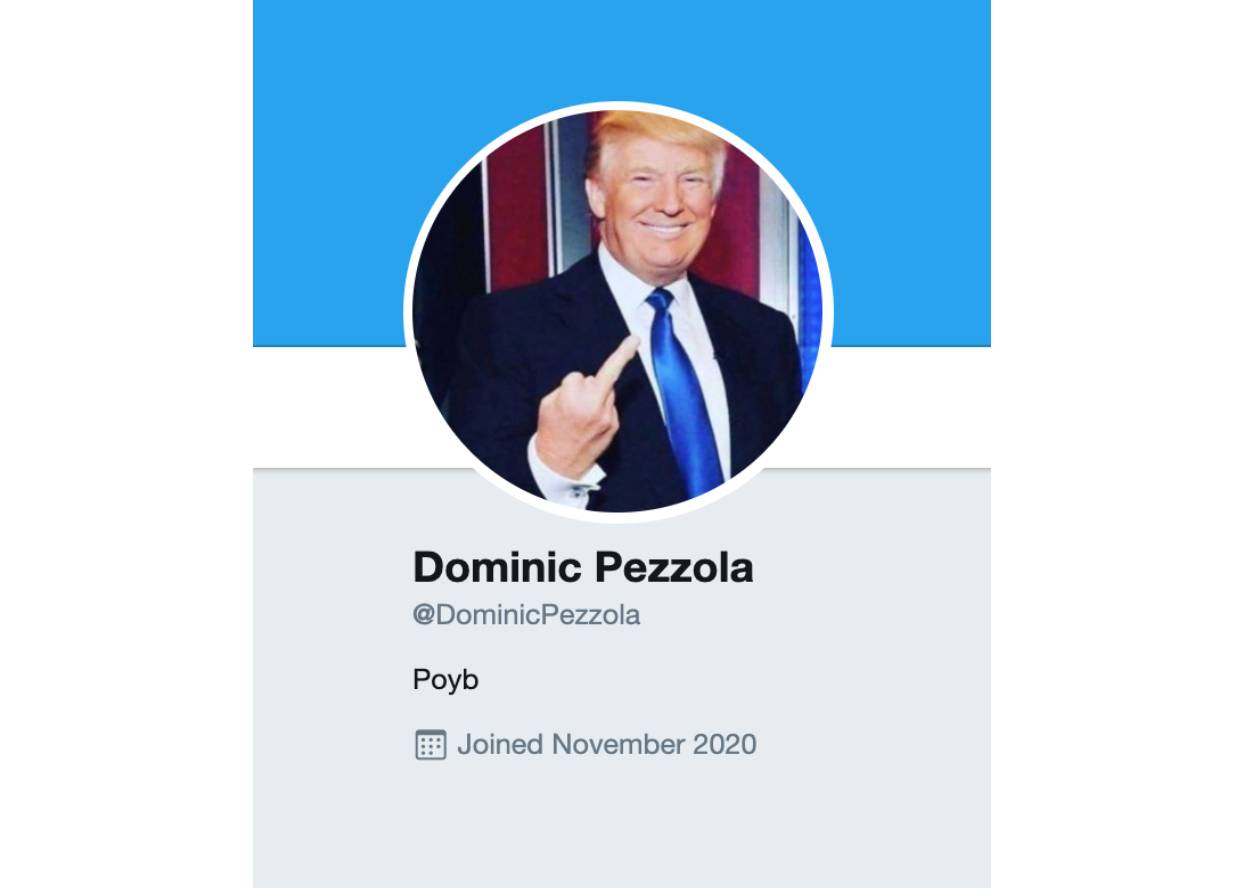 Few from Aquinas stayed in touch with Pezzola over the years, but he resurfaced in their lives through Facebook, when former classmates began organizing alumni groups. Multiple former classmates described being so shocked by the tenor of his rhetoric that they had to remove him as a friend. “I couldn’t believe what I was seeing,” one woman said.

For example, Pezzola would post photos of weapons as well as what she called “racist posts.”

Do you have information about the Proud Boys or other extremists’ actions at Capitol Hill? We’d love to hear from you. You can contact Mack Lamoureux and Tess Owen securely on Wire at @mlamoureux and @tesstess, by email at [email protected] and [email protected], or via Signal or Telegram at 267-713-9832.

“He was extremely, I don’t even want to use the word, conservative, it was just insane,” she said. “The stuff he would post. A lot of it was scary. There was a lot of anger.”

Another classmate who remained Facebook friends with Pezzola said that his posts became progressively more extreme over time. “He was angry at Obama. Probably reading too much internet propaganda,” he said. “If I am being honest, I am not that shocked. The views he espoused—this is how this rabbit hole goes.” 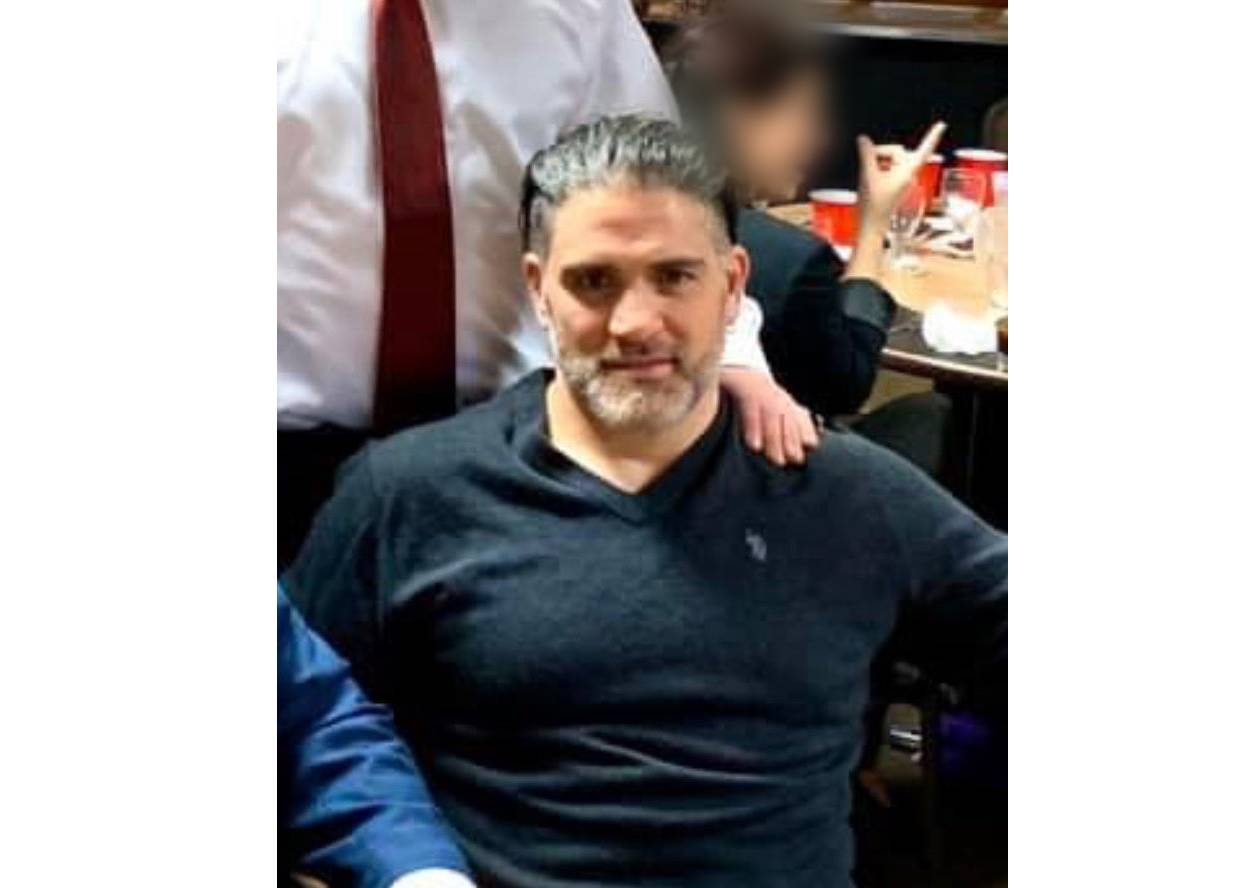 An undated photo of Pezzola provided to VICE News.

Public records indicate that Pezzola alternated political affiliations in the late 1990s between Democrat and Independent, but hasn’t voted in New York since 2001.

Pezzola joined the Marines after graduating high school and completed training at Parris Island, South Carolina, in 1998 according to contemporaneous local news reports.

READ:  Some of the Dumbest Things That Happened During the Insurrection Chaos

Days before the January 6 insurrection, Proud Boy leader Enrique Tarrio posted a dramatic photo of Pezzola to his Parler account. In the photo, taken at an earlier protest in D.C., Pezzola is clad in his Proud Boy “colors” and is staring down a group of antifascist protesters, alongside the caption “Lords of War” with the hashtags “#J6” and #J20,” referring to the certification of the Electoral College vote in Congress and date of Biden’s inauguration. One person responded to the image enthusiastically “Spazzolini is the Marine in front,” he wrote. “An iconic marine.” 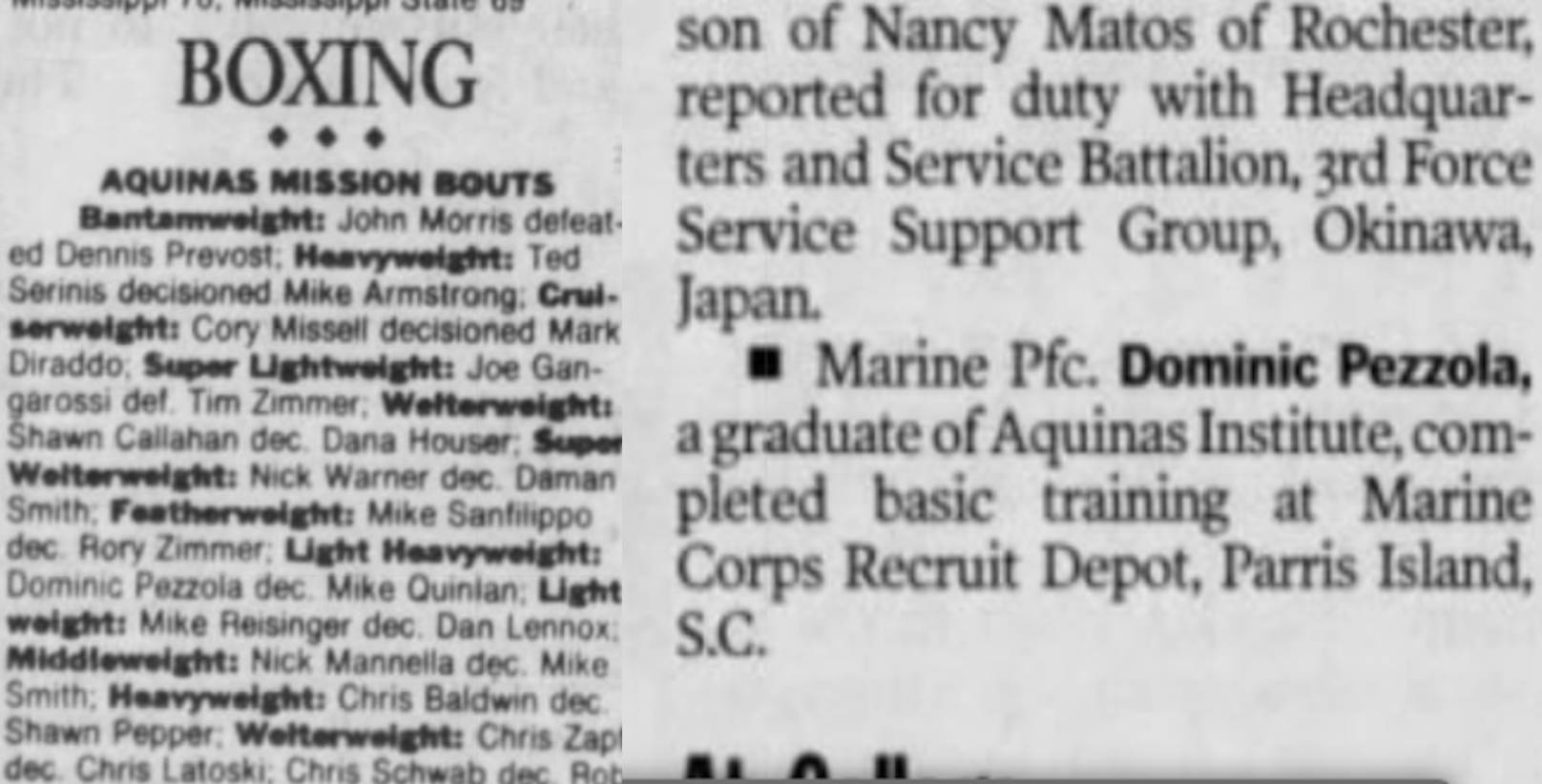 His former classmates said that his military training was a point of great pride for Pezzola and he regularly posted about it on social media. The person who knew Pezzola for over 20 years said that while Pezzola was extremely proud of his time in the Marines. VICE News has reached out to the Marines for comment but have yet to hear back.

Several people who VICE News spoke with said that they have already talked to the FBI or know someone who has spoken to the FBI regarding Pezzola. One said that Pezzola had cut his long hair and beard in an effort to evade detection from authorities.

VICE News attempted to contact Pezzola via phone numbers connected to his business, two immediate family members, and one close friend on the phone as well as reaching out to his father and other family members on social media. One of his sisters returned VICE News’ phone call, but when we explained that we were hoping to talk to her about Pezzola she hung up.