For nearly a year, queues of hundreds of university students waiting at food banks in France have been an alarming, yet common, sight. Insufficient support from the French government and universities has led to a heartbreaking struggle for young people who have found themselves unable to afford food due to the economic fallout from the coronavirus pandemic.

Now, non-profits, chefs, and restaurant owners across the country are stepping in to help. Last Saturday in Paris, 870 students filed patiently into Ground Control, a massive cultural space in the 12th arrondissement that had been transformed by the sustainable food non-profit Linkee into a food distribution point exclusively for students. Many had journeyed from across the city and from nearby suburbs for a haul that included a 11-pound tote filled with organic produce and locally-sourced dairy, a pack of pantry staples and hygiene essentials, as well as a hot meal donated by one of several chefs and restaurants participating in a student program from Ecotable, a network of ethical and eco-minded food industry workers. The visit was a last resort for these young French and foreign students, some of whom had taken to skipping meals while attempting to feed themselves on two euros a day. It has also doubled as one of few opportunities remaining for social contact, and Linkee has done its best to make the experience as uplifting as possible.

“I love the ambiance here. There’s music, everyone is friendly, and it’s a huge help for me,” explained Zerraf Lina, 22, a first-year Paris Dauphine student in information science from Algeria who planned to work on the side to afford her living expenses. But with the disappearance of part-time jobs in restaurants, cafés, shops, and even as childcare providers, so too went the promise of stable income. “My aunt left me her apartment, which is a relief, but I have no money coming in, I’m alone, and eating has become, let’s say, very complicated.”

Long before the first COVID-19 lockdown, students had been active in alerting the public to their growing financial fragility — a staggering 20% of students live beneath the poverty line in France. Their anger was further prompted by the self-immolation of a 22-year-old student in Lyon in November 2019, whose act followed the news that his request for urgent financial aid to support himself had been rejected by the Crous (Centre régional des œuvres universitaires et scolaires), a regional organization handling university residences, student life, bursaries, and canteens. His attempt (the student survived) was meant to ring alarm bells and underscored the feeling of hopelessness among young students; the pandemic has brought these inequities into starker relief.

READ:  This Is the Most Embarrassing News Clip in American Transportation History

Faced with closed campuses, prolonged distance learning from the tight confines of student dorms or small studios, an already uncertain job market (by the end of 2020, there were 619,000 unemployed 18-to-24 year olds, a 16% hike in a year, according to Le Monde), university students are facing a triple burden: psychological distress, financial strain, and now food insecurity.

“We feel like we’re poor before even getting a chance to start our professional lives,” said one student at Ground Control who preferred to remain anonymous. “I have a small amount of money from my internship but that only covers my rent.” Scholarship recipients report a similar struggle and little support from their families, many of which are undergoing financial hardship or loss of employment of their own. As a result, students are increasingly forced to seek assistance from national charities, such as Secours Populaires and Restos du Coeur, in addition to a surge of new groups, such as the student-organized Co’P1, that distribute prepared dishes as well as groceries. This food insecurity is on top of a steep rise in depression, anxiety, and loneliness which the National Observatory of Student Life estimates is impacting one third of the country’s 2.7 million university students.

For foreign students, the feeling of isolation and shame is even greater, according to Antoine Ehrhard, a gestalt therapist who volunteers with the organization Les Psys du Coeur, at Linkee events. “I’ve spoken with several who won’t tell their parents that they’re struggling because they know they couldn’t help even if they wanted to. It’s hard for them to reach out but often just us being there to listen and point them toward other resources and services makes a big impact.” 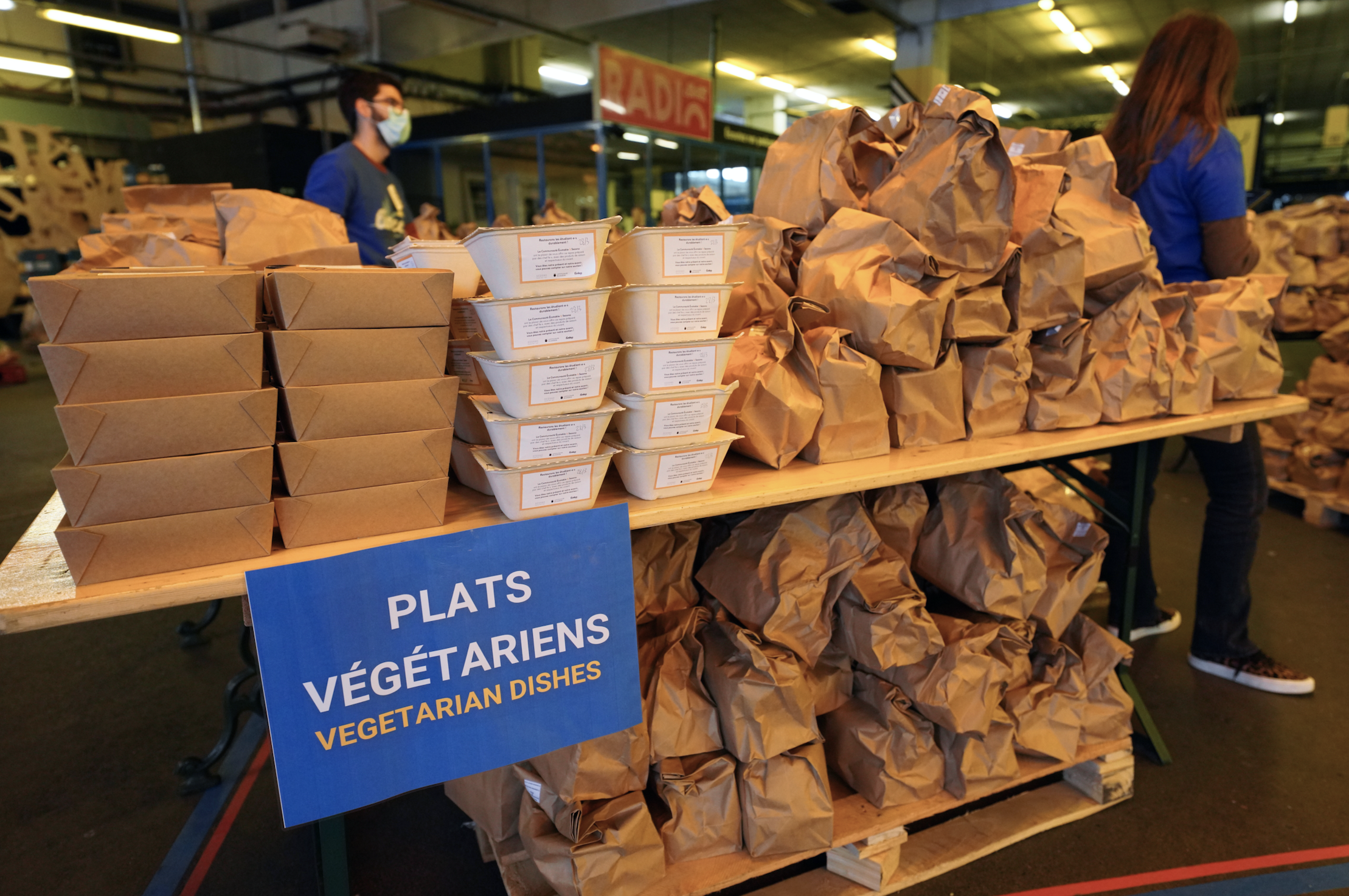 In a recent France Télévision report, an 18-year-old student at the Sorbonne who lives alone in a studio apartment expressed his mounting anxiety with managing daily life and the looming risk of breaking point. “Everyone around me is depressed. Some have dropped out. How are we supposed to sit for 8-10 hours at our desks on Zoom when we’re thinking about death? When you’re alone and you’re afraid to die at home? That’s one of my fears—dying at home and it taking days for someone to realize it.”

READ:  Sherri Shephard Shows Off Her Incredible 20 Lb. Weight Loss – Before & After Pics

The severity of the situation has sparked provisional measures from President Macron, including subsidized meals offered for one euro to all students at university cafeterias and three consultations with a partner psychologist or psychiatrist, at no cost. Other grassroots initiatives have received support and visibility from local municipalities, including one-euro fruit and vegetable baskets available at town halls, but very little in the way of lasting solutions. For those confronting the issue on the ground, these government efforts don’t go nearly far enough.

Caroline Zorn, the vice president of the Eurometropole of Strasbourg in northeastern France, is campaigning for a universal basic income for students, much like the student salary scheme in place in Denmark. “20 years ago, 10% of students worked to finance their studies. Before the pandemic, it was 50% and they’re now finding themselves without any income. We can’t settle for distributing packs of pasta,” she told Sud Ouest. As of now, the government has rejected the idea of a basic income program for students.

For Julien Meimon, co-founder and president of Linkee, support from the state has to begin with the big picture. “The government first needs to understand what student precarity is in its entirety and then offer them a security net,” he told VICE World News. “Unfortunately, the government is very slow to understand and react.” In the meantime, Linkee has distributed the equivalent of 25,000 meals in food kits and hot dishes weekly since October. “I’m outraged by this situation for our country, for the fate of our young people, and frankly for all of our futures,” said Meimon.

But it isn’t only non-profits that have stepped in to help. In Lyon, two friends launched 1 cabas pour 1 étudiant  (1 tote for 1 student), an online platform that connects students with individuals in the city who are able and willing to finance their groceries or household essentials. The concept should expand to the rest of the country this spring. Back in Paris, La Grande Mosquée de Paris has been financing free sandwiches for students at the Paris Monge bakery in the 5th arrondissement since mid-February and will do so until the end of the semester, Maison Landemaine is offering 5-euro fixed meals to students, which include a sandwich, a drink, and a pastry, and Terroirs d’Avenir, the city’s leading slow-food purveyor, has low-cost options at each of their bakeries, fromageries, and butcher shops.

Chefs and independent restaurant owners, from Harouna Sow of the Refugee Food Festival to Guillaume Muller of Garance, a fine dining restaurant in Paris, have gotten involved with Ecotable and Linkee, much like they did at the start of the pandemic when they prepared meals for healthcare workers, to help in the way that they can: with time, ingredients, and comfort. “We all had to step in. Being sustainable in Ecotable terms doesn’t just refer to what you put on the plate but to human relationships,” explained Simon Auscher, co-founder of the locavore catering company 11h59 / Psomi who donates around 50 meals a week for students.

As the city faces its third semi-lockdown and many workers remain inactive due to restaurant closures, the volunteer operation has offered participating staff a renewed sense of purpose. “The cooks who have been on part-time unemployment for the last year are eager to work and jumped at the chance to help with this initiative. It’s been psychologically difficult for everyone,” said Auscher.

Sugio Yamaguchi, chef and co-owner of Botanique, a neo-bistro in the 11th arrondissement that has been closed due to government restrictions since last November, said that donating meals is about making sure that students have something nourishing that also lifts their spirits. “A pasta salad is fine but I’m looking at this as a way to do more than fill their bellies, they deserve pleasure,” said the chef from his kitchen as his team put the finishing touches on a seasonal vegetable tart with an herbed vinaigrette that they prepared to donate.

“The operation works because everyone helps with the means they have,” added Auscher. “If making food for these kids can improve even a moment of their day, then we’ll keep doing it.”