A massive procession of gig workers riding e-bikes with food coolers strapped to their backs protested in streets of Manhattan on Wednesday with a growing set of grievances: wage theft, no access to bathrooms, arbitrary deactivations, rampant e-bike theft, and violent assault and murder while they’re working.

The mass demonstration was the second organized by Los Deliveristas Unidos, a growing grassroots campaign formed by immigrant Latinx delivery workers in New York City during the pandemic. The group formed last year to organize for better working conditions on food delivery apps, as New Yorkers laid off during the pandemic have turned to gig work. In recent weeks, workers have organized on Whatsapp and other apps to form self-defense groups.

Wednesday’s protest follows a growing trend of violent assaults and murders of app-based grocery and food delivery workers not just in New York City, but across the United States. In early April, a 29-year old e-bike delivery delivery worker, Francisco Villalva Vitinio, was shot and killed while delivering food in Manhattan. In Washington DC, two teenage girls allegedly carjacked and killed a 66-year old UberEats driver, Mohammed Anwar, in late March. Gig workers have also been killed in Illinois, Texas, Virginia, New Jersey, and Michigan over the past 18 months.

READ:  Gua Sha Tutorial: The Benefits Of The Latest Viral TikTok Trend & How To Do It

The assaults and murders have forced e-bike delivery workers to do their jobs with the constant threat of violence and financial ruin looming over their heads.

“A year ago, the restaurant I worked at closed so I started delivery food,” Max Morales, an e-bike delivery worker who lives in the neighborhood of Astoria, Queens and works for GrubHub, Postmates, and DoorDash, told Motherboard in Spanish. “I was robbed of my bike at night at knifepoint. A lot of my friends have been robbed.”

“We protested because we don’t have any security if this happens or if we get in an accident,” he continued.

Members of the group, who call themselves “deliveristas,” work for platforms run by tech giants such as DoorDash, GrubHub, Postmates, and UberEats, as well as smaller delivery companies such as Relay and Chowbus. Many of them are former restaurant workers from Mexico and Guatemala who lost work during the pandemic.

“These workers don’t get paid on time. Tips disappear. The pay isn’t credited to their bank accounts even though they file a claim. There’s definitely a need for more transparency so these problems are clarified,” said Maria Figuroa, the director of labor and policy research at Cornell University who conducted the survey.

“We’re facing many issues: robberies, physical assault,” said Gustavo Ajche, an e-bike delivery driver from Mexico, in a press conference for Los Deliveristas Unidos on Tuesday. “We’re being killed in the streets  by people who steal our bikes. This is happening more and more and we’re angry because no one does anything.”

Because gig workers are independent contractors, tech platforms, such as UberEats, DoorDash, and GrubHub, are not required to provide workers with health insurance, workers’ compensation, or sick leave. When workers are robbed, assaulted, or die on the job, gig economy companies owe them and their families nothing in return. Workers say the police don’t help either.

READ:  These Slip-On Sneakers Have Just As Many Reviews As Vans But Cost 1/2 The Price

“We all work with multiple apps,” Ajche continued. “Each app operates differently but they are the same in that they all try to profit without offering protections to workers.” 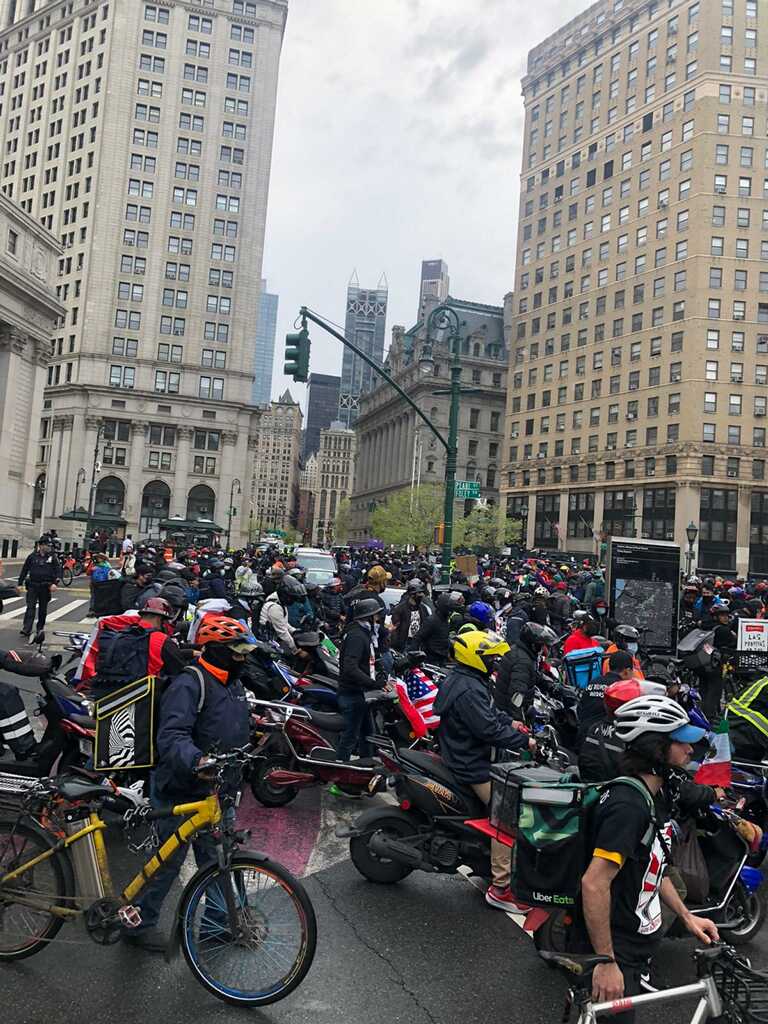 Los Deliveristas Unidos is pushing for New York City Council to pass a package of laws that would improve their working conditions, including the right to use restaurants’ bathroom (which have been closed to workers during the pandemic), insurance to protect workers from robberies, free personal protective equipment, access to a copy of their receipts to verify tip amounts, and limits to distance and weight on deliveries. Since its inception in October, Los Deliveristas Unidos has grown to include immigrant delivery workers from South Asia and Africa.

“The legislation hasn’t been introduced yet,” said Ligia Guallpa, executive director of the Workers’ Justice Project, which supports Los Deliveristas Unidos, at a press conference on Tuesday. “But we’re trying to advocate for elected officials to pass legislation effectively as soon as possible.”