A fighter rooster killed its owner in the southern Indian state of Telangana over the weekend.

The victim, a 45-year-old poultry farmer called T Sathaiah, frequently put his bird up for local, illegal cockfights. He bled to death after his rooster, armed with a 7-centimeter-long knife strapped to one of its claws, impaled Sathaiah in the groin when it struggled to free itself.

The death gives a peek into how wildly popular – and violent – cockfighting remains in parts of India despite it being banned in 1960.

In rural India, cockfights are a source of entertainment during the winter harvest season. Raghurama Krishna Raju, a political leader and industrialist from the southern Indian state of Andhra Pradesh, is a fan.

“Cockfighting has been around for thousands of years. Back in the days, there used to be cockfights between kingdoms. It’s a part of our lives,” Raju told VICE World News.

In 2018, Raju sought to end restrictions on cockfights in his state. His home district, West Godavari, is famous for offering the “Super Bowl of cockfighting. “For many people, rearing birds for fights is their only source of income,” he said. “It’s a great sport, but the knives do add the element of cruelty. Without knives, it should be an acceptable sport.”

The sharp spurs on the leg of the rooster is seen during a cockfighting ritual in the western Indian state of West Bengal. Photo: Getty Images

Cockfighting in India often assumes the form of a carnival, where elaborate battlegrounds are erected, multimillion-dollar bets are placed, and liquor flows in abundance. During the bouts, the winner takes home all the prize money, and the losing cock, well, dies.

“The most fascinating peculiarity of cockfights is that this bird is the only one that fights until death,” said Raju, adding that the cruelty is part of the thrill.

“But people kill birds for food anyway and that’s cruelty too,” he said.

“Surely, this sport is not as risky as Jallikattu,” he said, referring to the Indian sport in which men try to grab the hump of the bull’s back and hold on to it for entertainment.

Animal welfare activists have been denouncing cockfighting for decades, as well as the paltry penalty of 50 Indian rupees (68 cents) for those convicted of animal cruelty.

But as blood flows – as is intended by arming the birds with knives – cocks aren’t the only ones dying from a cockfight. 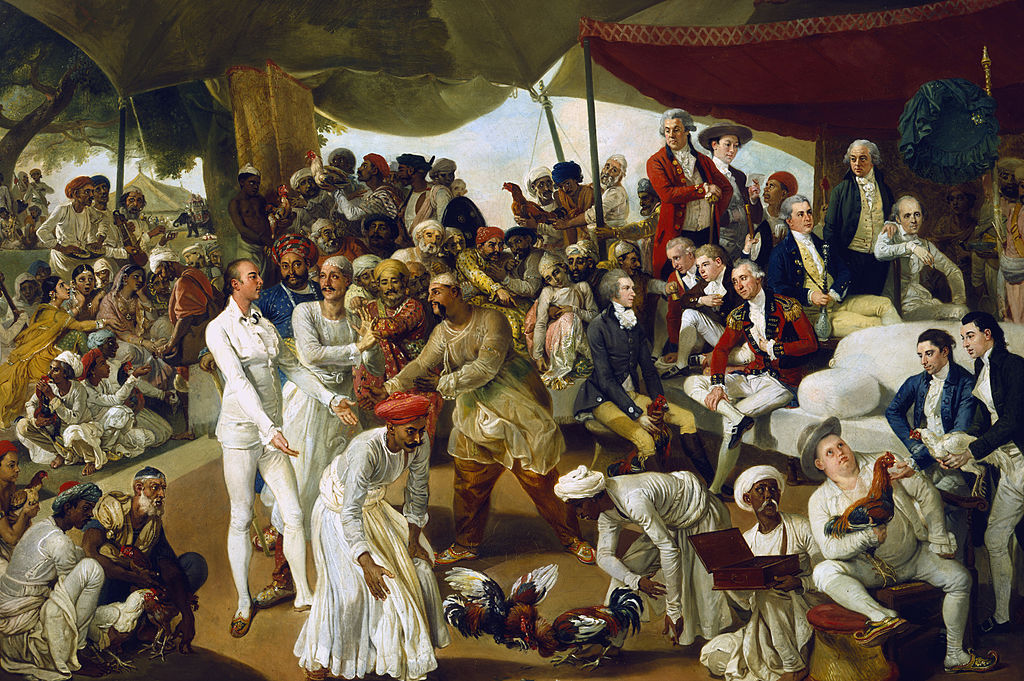 A painting dated 1790 and titled ‘Colonel Mordaunt watching a cock fight at Lucknow’. In an open-sided tent, East India Company officers and administrators sit and stand under a canopy. In the foreground two cocks with metal spurs fight, anxiously watched by attendants. Various members of the surrounding Indian crowd hold their fighting cocks in readiness for their turn. The work belonged to Warren Hastings, the first Governor-General of India. Photo: Ann Ronan Pictures/Print Collector/Getty Images

In last year alone, at least three people were killed by fighter birds. In January 2020, a 50-year-old man was stabbed to death by a fighting blade before a bout. Another man, 25, succumbed the next month to his bird’s blade cut on his ankle in the western Indian state of West Bengal. Then, in June, a rooster jockey bled to death in the southern Indian state of Tamil Nadu after a bird cut his thigh during a bout.

“People are actively misled and told that it’s an Indian tradition,” she said. “The festival season, when these cockfights happen, are also a time for amazing food and colourful rangolis (an Indian floor art). But these cockfights are peddled as part of the culture when drawing blood and gambling are really not.”

Gambling, which is also banned in India, is a key part of cockfighting. In Andhra Pradesh, cockfights are an estimated $130 million business despite the ban.

“Most of the participants are farmers with inconsistent income,” Paropkari said. “Many of them spend their entire year’s income on this in the hopes that they will win. But what really are the chances in gambling?” 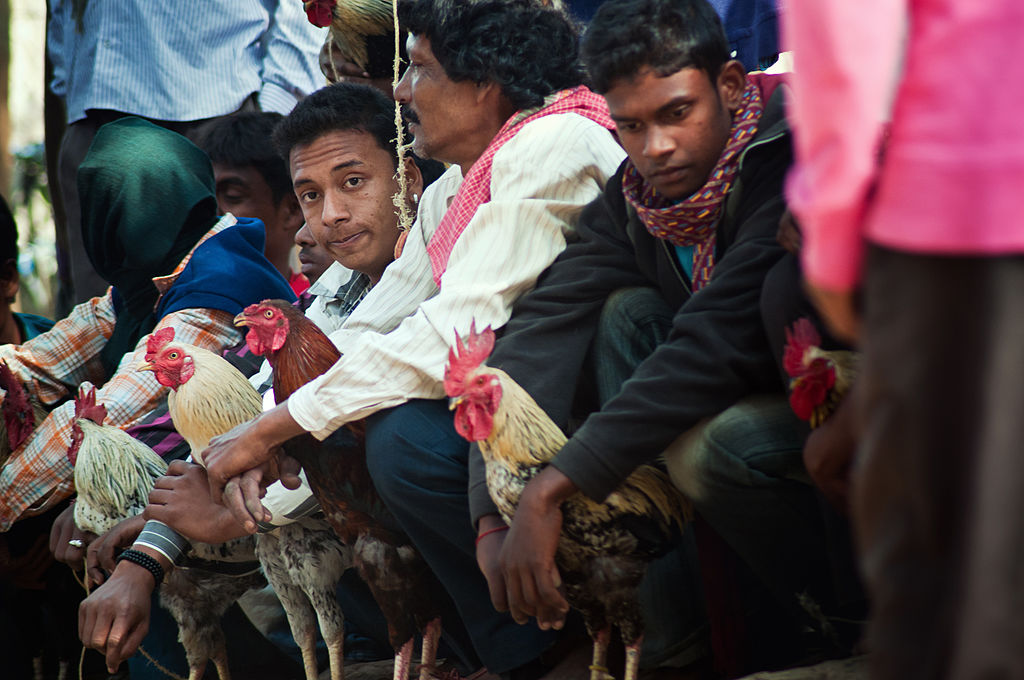 Spectators at a cockfight in West Bengal. Photo: Getty Images

Cockfights are clandestine affairs in some parts of India, but Paropkari said bouts are openly advertised in local newspapers and TV channels in Andhra Pradesh, her home state.

Indian authorities have reportedly looked the other way when a cockfight is endorsed by political leaders. In 2018, a police official told The Hindu newspaper how authorities enforced restrictions on cockfighting a few days ahead of a match, but let it happen anyway because of “political influence.” 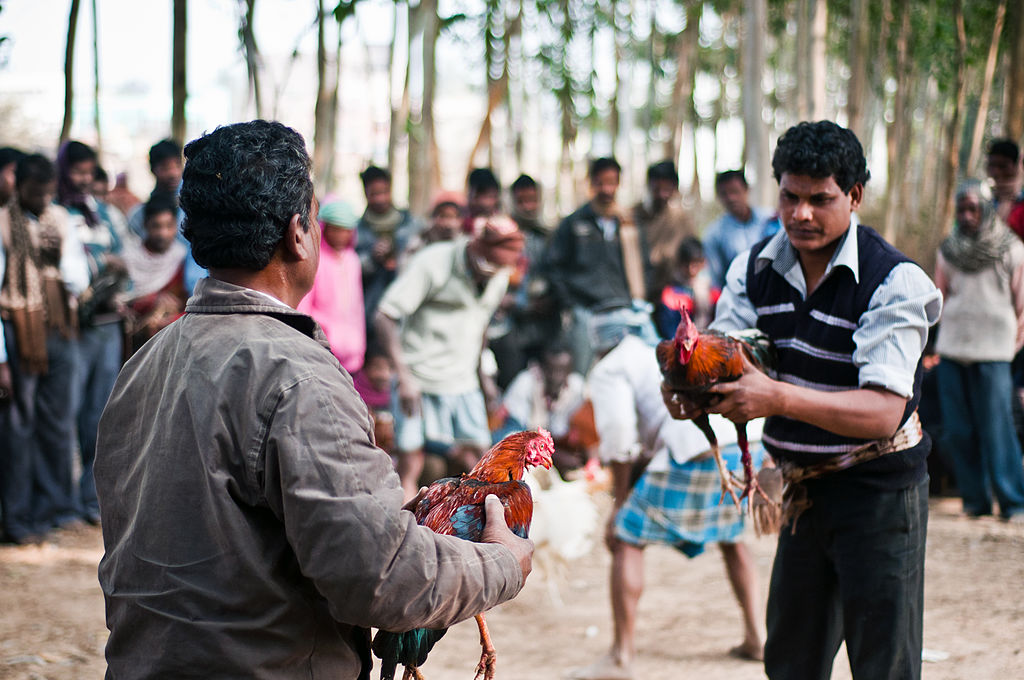 Cockfighting sometimes gets deadly for humans too. Photo: Getty Images

Organisations including Humane Society International have sought to track cockfights. Paropkari said that many cockfighting events are now streamed in real time to enable online betting.

Paropkari also links cockfighting with other illegal activities apart from gambling, such as the use of child labour. “Kids are employed to serve illicit alcohol and food to the visitors, and are also tasked with cleaning up the blood after the matches. They also pluck the feathers of the dead roosters for the winner to take home,” Paropkari said.

“There are at least 10 different collateral crimes with cockfighting. This crime does not exist in isolation.”