PUNTA ROCA, El Salvador – The life of Salvadoran surfer Bryan Pérez is marked by luck, both good and bad. He was born near some of the best waves in the world, but on a coast controlled by El Salvador’s brutally violent street gangs.

That combination made him who he is today: the most successful surfer in El Salvador and a four-time World Cup champion.

“The only things that saved me from being a gang member were my parents and surfing. But a lot of the best surfers, even some better than me, got swallowed up by gangs,” he says.

Bryan Pérez is El Salvador’s Lionel Messi, only in surfing, not soccer. At just 21 years old, in a country where, until very recently, surfing was a sport that had always been ignored, he has taken the Salvadoran flag to four world championships and visited at least 15 countries on three continents in different competitions.

Born into a humble family in a poor community on the Salvadoran Pacific coast called Punta Roca, Pérez was next to some of the best waves in the world, according to internationally recognized surfers such as Gabriel Medina and Adriano de Sousa. There, Pérez lived his childhood baking and selling bread in the markets and on the streets, together with his parents and his three siblings. Later, when he was a teenager, he began to watch over and wash the cars of the tourists who came to surf.

“My dad taught me to surf when I was eight years old,” says Pérez. “That [first] time a wave almost drowned me. I was scared. But that feeling soon disappeared, and then I would take my dad’s surfboard out without his knowing and go surfing instead of going to school. They always scolded me because they noticed that I used to go and ride waves instead of baking bread.” 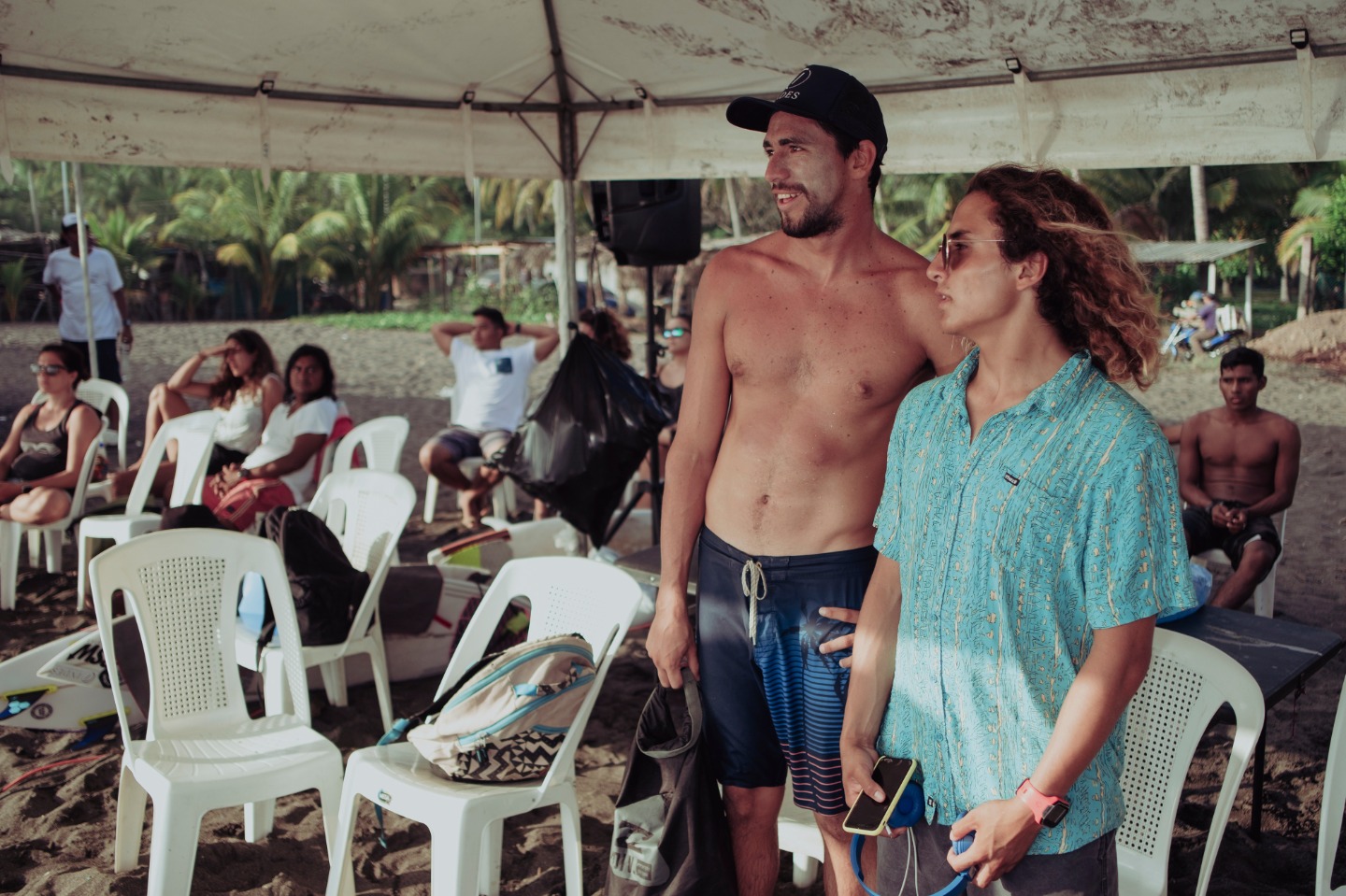 Bryan Pérez (left) watches local surfers with a friend. His abilities have taken to him to competitions all around the world. Carlos Herrera for VICE World News.

One day, when Pérez was nine, one of the tourists whose car he was watching gave him a piece of a surfboard. “Repairing a surfboard is very expensive, so I took that piece of a board and used it as my surfboard,” he remembers.

By then, in 2008, gangs in El Salvador, mainly the Mara Salvatrucha, known as MS-13, and the two factions of Barrio 18, already controlled most of the country, including the community where Pérez grew up. In 2015, the Salvadoran government estimated that there were 60,000 active gang members, in a country with a population of 6.7 million. By that count, almost one percent of the population are active gang members, without taking into account their collaborators and lower-ranking members.

“I had a friend who always beat me when we competed riding the waves. He was my age. We used to go together to the finals…All the old surfers said that he was going to be very good. Then, he got into gangs and ended up fleeing the country. His mother took him away because, here, he was going to get killed,” Pérez recalls.

READ:  Alison Sweeney Teases Sami’s Return To ‘Days Of Our Lives’: She’s ‘Up To No Good’

At the age of 14, Pérez began to compete seriously and surfing stopped being just a hobby and became his passion. “At that age, I competed in the underage category. I started training with my manager, Marcelo, and I became a champion. That’s when I knew: This is my thing.”

Between his training sessions and the championships, Pérez continued living in his family’s humble home and selling bread. “I remember that whenever I had a competition, my mother would give me a kind of lunch: sweet bread or bread with beans that she had prepared for our family to eat because we had no money,” he says.

From a young age, as he started winning competitions he started competing in other countries, something he had never imagined. “Surfing takes you to crazy places… to Japan! The other side of the world! I have also been to Indonesia. If someone had told me when I was a child that surfing was going to take me to the other side of the world, I would have told them that they were crazy,” says Pérez, smiling.

But the bad luck was still there. In 2014, when Pérez was 15, two gangs got into a shootout near his family’s house. A stray bullet went through the roof, directly hitting his younger sister. She died instantly.

“She was a baby. She was about to turn two years old. The attack was not meant for us, but it… it killed her. I always think of her… I think it’s the hardest thing that’s ever happened to me,” says Pérez.

Following the tragedy, he pulled out of the competitions he was in at the time. “I no longer wanted to compete, I no longer wanted to do anything. I stopped surfing for two weeks. But then I got motivated again and competed hard all the way to the finals of that event. And I made it to the final and won. That’s why my username in all my social networks is 14. BryanPerez14. Because it is a year that marked me.”

READ:  Apple Is Going to Make It Harder to Hack iPhones With Zero-Click Attacks

After his sister was killed, Pérez moved away to live with his manager Marcelo Castellanos, far from home. Castellanos had founded the first, and only, surf academy in the country.

“When a big wave sinks you, you have to calm down. Because if you despair, you waste energy and oxygen… and just imagine if another wave comes… you drown. That’s why when a wave sinks me, I let it make me a massage and pull me back to the surface. If you start fighting with the sea, you lose. You have to master the sea, not fight it,” said Pérez.

Pérez is convinced that surfing changed his life and kept him away from violence, and has become a teacher for children in his community. “Surfing is not only a sport, it is a lifestyle that brings many opportunities for growth. It teaches you to be a better person and to be very grateful,” says Pérez.

Salvador Castellanos, a surfer and social entrepreneur who leads an organization that helps poor youth and teenagers at risk of gang recruitment called “Compartiendo Olas” [Sharing Waves], says that Pérez is an icon.

“Perez wanted something different for his life. And now he is, without a doubt, the best surfer in El Salvador.”