A Spanish rapper who had locked himself inside a university with supporters to avoid a jail term was arrested on Tuesday after a tense standoff with police.

Left-wing rapper Pablo Hasél – real name Pablo Rivadulla Duró – had been given until last Friday to hand himself over to the authorities to begin a nine-month sentence on charges of glorifying terrorism and insulting royalty in his music and tweets.

Instead, the 32-year-old locked himself inside Lleida University in Lérida, about 150km (90 miles) west of Barcelona on Monday, along with about 20 supporters, and challenged authorities to come and get him.

“They’ll have to break in to take me and jail me,” he tweeted Monday, sharing a video showing gates to the rector’s office chained shut.

On Tuesday, they did just that. Dozens of police stormed the university buildings where Hasél had taken refuge, while his supporters responded by spraying fire extinguishers down a stairwell.

Nearly two hours after police went in, Hasél was marched out of the building, shouting at reporters: “We will win, they will not bend us with all their repression, never!” He was driven to a nearby prison to begin his sentence, according to reports.

Hasél was handed a two-year sentence and a fine of nearly 30,000 euros (almost £26,000) in 2018 for glorifying terrorism, insulting the Crown and insulting state institutions, after Spain’s top criminal court ruled that his lyrics and tweets exceeded the limits of free speech, and amounted to expressions of “hatred and attacks on honour.”

The offending lyrics and tweets, posted between 2014 and 2016, included references to former Spanish King Juan Carlos as a mafia boss and drunkard, accusations that police tortured and killed migrants, and praise for ETA, the defunct Basque terrorist group, and other banned organisations. 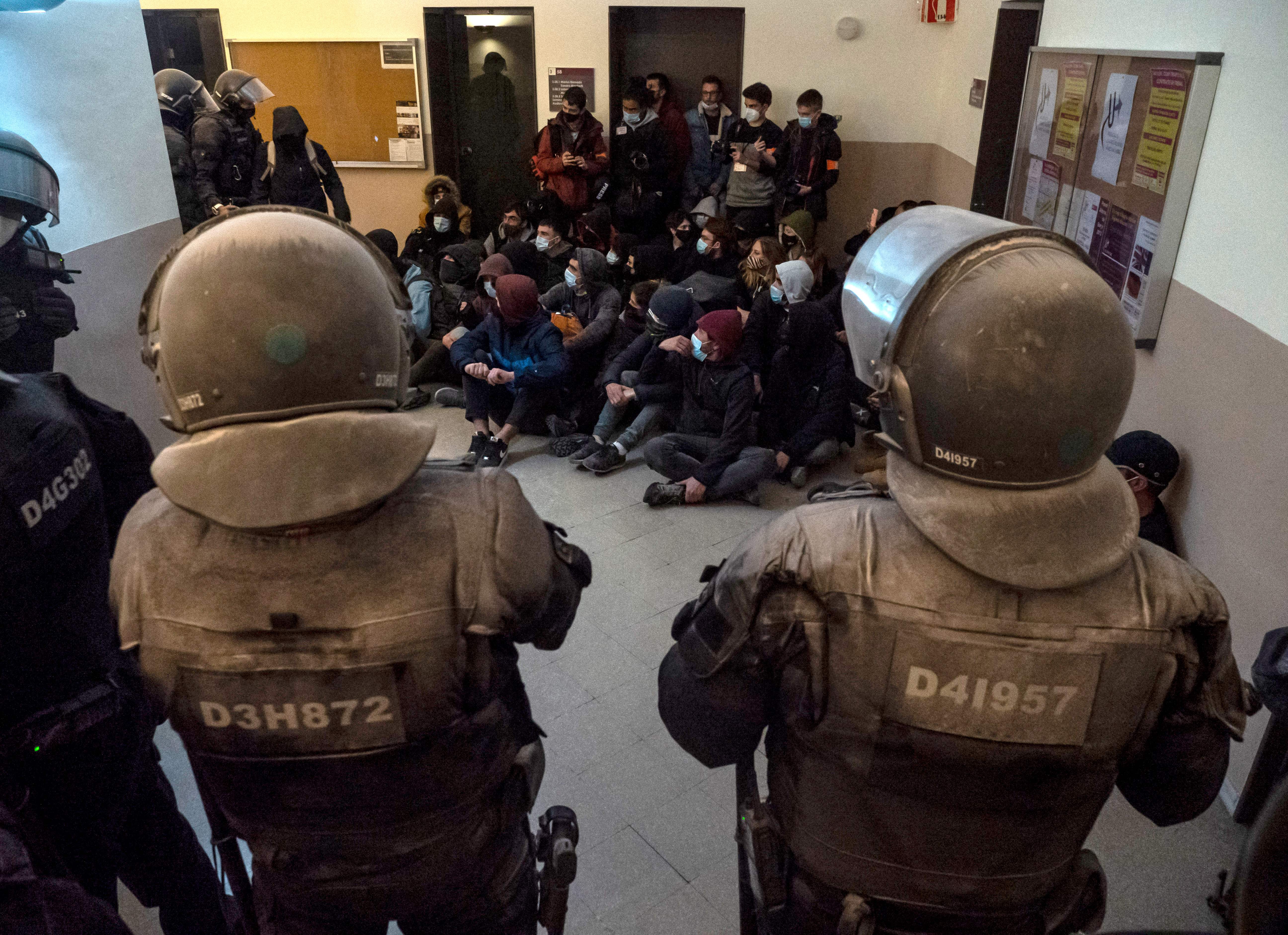 People stage a sit-in at Lleida University to try to prevent the arrest of Pablo Hasél. Photo: J. MARTIN/AFP via Getty Images

His sentence was later reduced to nine months on appeal.

The case has fuelled a fierce debate on freedom of speech in Spain, and made Hasél a cause célèbre, with more than 200 artists, including actor Javier Bardem, signing a petition defending the rapper.

“We are aware that if we allow Pablo to be jailed, tomorrow they could come after any one of us, until they have managed to silence any sign of dissidence,” read the petition.

Amnesty International has also criticised the charges against Hasél, with Esteban Beltrán, director of the organisation’s Spanish branch, calling his imprisonment “an excessive and disproportionate restriction on his freedom of expression.”

“No one should face criminal prosecution only for expressing themselves on social media or for singing something that may be distasteful or shocking,” he said. “Expressions that do not clearly and directly incite violence cannot be criminalised.”

In response to the controversy, the Spanish government announced last week that it plans to change the law to rule out prison terms for crimes involving freedom of expression.

Hasél is not the first Spanish rapper to fall foul of the country’s so-called “gag law,” introduced amid controversy in 2015. In 2018 the rapper Valtònyc was also sentenced to three-and-a-half-years in jail for glorifying terrorism and insulting the monarchy. He fled to Belgium, where a court blocked a Spanish extradition request, but he remains wanted by Spanish authorities.