Deedlit in Wonder Labyrinth is as upfront about its existence as a game can be. From the opening moments of the titular character waking up in a mysterious forest clearing set-dressed for Nicol Williamson’s pagan exasperations in Excalibur to the flimsiest of plot-threads and the way it interjects characters from the original anime property. Wonder Labyrinth is what Team Ladybug does best—draping borrowed IP over a hypercompetent metroidvania skeleton.

It works. There’s nothing here that isn’t smooth and beautiful. There’s an effortlessness to the way in which the edges of Touhou Luna Nights and Shin Megami Tensei: Synchronicity Prologue have been sanded down and polished. For people with no real connection to Deedlit or Record of Lodoss War; the narrative is inconsequential and non-interruptive. If you just want a new metroidvania, here you go. If you specifically want a Record of Lodoss War metroidvania, well this one you can pick up and it won’t mess with any of your preconceived notions or upend your personal headcanon in any meaningful way. But also, it won’t really offer up anything new or invigorating. It’s what you know, in as pleasing and permissive a form as possible. This is a Lodoss metroidvania for the mobile gaming generation. Stage-centric with a proliferation of save points that will make even bonfire critics of Dark Souls 3 quiet down. Boss fights are rarely unfair and everything feels and looks nice.

If anything it’s too smooth. It’s a house that’s so fitted together and bound up in Tyvek that it’s poisoning the inhabitants who haven’t gone outside in a year. The difficulty ramp is easily flattened within the first twenty minutes of playing by simply buying a really powerful sword with the colossal volume of wealth you’ll have acquired, and then repeating this as you go along. When you die you’ll lose experience points (even to the point of losing levels), but it doesn’t matter. Even when that happens you’ll be back on your feet at the same level in seconds, not minutes. It’s a refinement on the refinements on Konami’s plateau-maker, Symphony of the Night. It feels safe to say that at this point, the genre has been so polished that we’re staring down at a waxed marble-topped mesa. Sure there are minor variations to the gameplay, like Wonder Labyrinth’s trigonometric archery puzzles, from time to time. But really metroidvanias are selling a narrative and visual wrapper for a set of readily understood mechanics and level designs. Which is fine if that’s what you’re looking for. Do you want a very light Lodoss fanservice metroidvania that won’t challenge you while being sleek and modern? Team Ladybug has delivered. Mostly. There’s an unfortunate side-effect to being such a finely glossed coating of a media property — aside from the character sprites, there’s very little Lodoss actually here. The grand theatrics of Record of Lodoss’ score, or the overwrought 80s ballad of the opening theme song, Adesso e Fortuna are replaced with functional but inconsequential metroidvania beats. And boss battles aside, enemies do communicate the Monster Manual pastiche of Forcelia (Lodoss’ setting), but none of the visual delight that originally brought them to life. Even as the levels and backgrounds are well-conceived, they have none of Lodoss’ borrowed and synthesized personality. 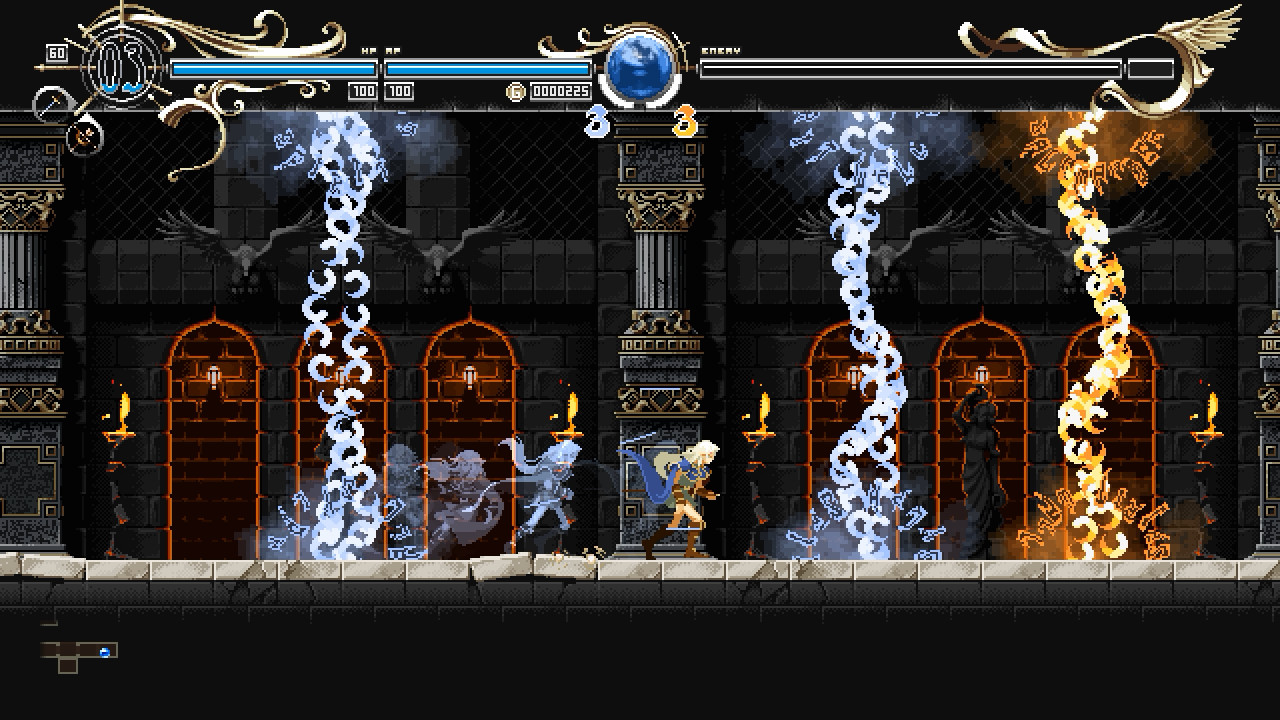 The sheer interchangeability of this adaptation is, depending on how you look at it, a crowning irony for Record of Lodoss War or a sad fate for a singular work that was such a heavy-handed pastiche that it stumbled into the status of being a classic, foundational work.

Lodoss comes from the time before “anime,” it’s in that transitional period where it was one of the few movies you could reliably rent from the more progressive Blockbusters. Together with Robotech (we wouldn’t get Macross until much, much later), Bubblegum Crisis, Dominion Tank Police, Fist of the North Star (the movie, not the series) and M.D. Geist, Record of Lodoss War would form the backbone of the late 80s early 90s anime consumption of most suburban youth. Lodoss was the gateway drug that had you dragging your father to Ballroom B in the Holiday Inn on the other side of town near the Big Tobacco corporate headquarters so you could buy a fansub copy of Macross II, a poster of Piccolo even though you hadn’t even watched Dragon Ball (he just looked cool as shit and you wanted that on your bedroom wall at 12) and the inaugural issue of Animerica (look, February 1993 was a good birthday).

Lodoss might have been your first introduction to Dungeons & Dragons.

The very first moments of the very first episode feature an adventuring party traveling through a thinly veiled version of the Tolkien’s Mines of Moria. Gargoyles spring to life as the party bickers over whether traveling through here is a good idea. It’s the fastest route, and the entire world is imperiled. If you’ve played a game of Dungeons & Dragons in the past 30 years, odds are—you’ve had this exact experience. Because that’s where Lodoss originates and where it draws its strength from. Record of Lodoss War is an animated adaptation of the light novel adaptation of a homebrew tabletop campaign transcript (“replays”). And like so many tabletop campaigns, it’s almost immediately recognizable. All the sins of its worldbuilding and overpowered characters, the couple who can’t stop from flirting in game, the extremely tropey adventuring party (the polymath magpie elf, cagey wizard, grizzled dwarf, the young would-be knight and his childhood friend who took up the cloth). Record of Lodoss War is ultimately the next evolution of Actual Play podcasts ripped out of sequence and buried in the past. It’s Critical Role’s eventual pivot thirty years before anyone even thought to play Dungeons & Dragons on a streaming video service. 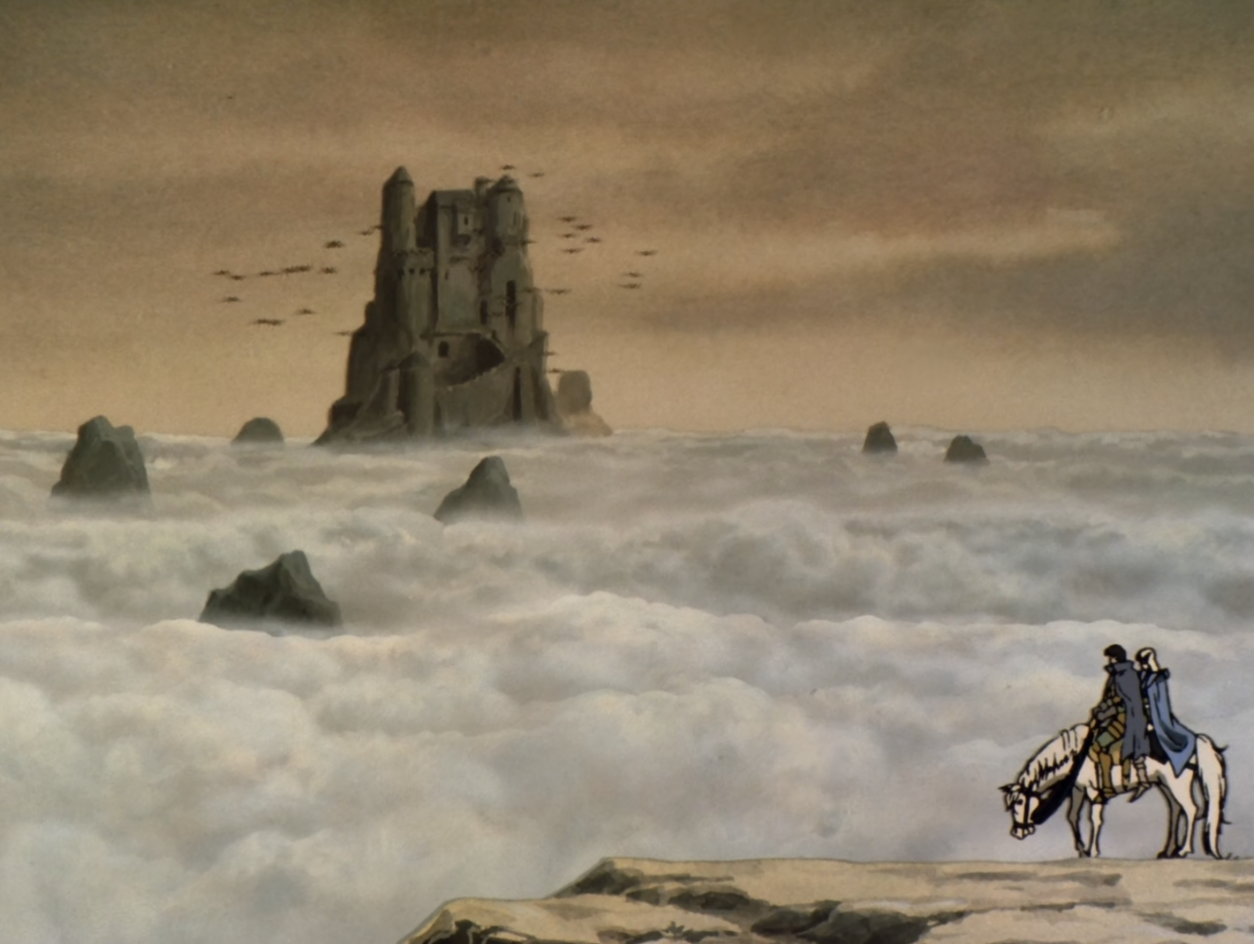 As colleague and friend Jon Bolding recently put it, Lodoss is amazing in that “some nerds scammed a TV Network into funding an anime series of their D&D campaign made up near-entirely of stolen IP.” And at the same time, Lodoss is the grandfather for fantasy anime bullshit. And that’s just beautiful. Slayn the enigmatic wizard is baked into the DNA of Final Fantasy XVI’s Urianger every bit as much as Kirito can’t help but be informed by Parn or the brooding, widow’s peaked tritagonist Ashram draws a line to Chrono Trigger’s Magus, and all of them trace their lineage back to Wizardry, and ultimately, to Dungeons & Dragons which doesn’t exist without tabletop wargaming and Tolkien. It’s adaptation and inspiration all the way down. Borrowing (sometimes outright stealing) pieces and paying them forward in new iterative properties. The adaptation of an adaptation of a transcript built of poorly veiled stolen IP is the beating heart of ALL fantasy.

Lodoss is so expansive, it eventually burst out from it’s D&D origins. A new rules system was created as it was being serialized (and eventually bound up into novels). This became its own campaign setting and rulebook, given the beautifully generic and perfectly fitting name — Sword World. There’s a panoply of Lodoss merch. From manga to figurines. I knew kids who had Woodchuck, the party’s thief, on their skateboard decks. There were even other video games (some of which are as weird and clunky as the original anime).

Which is why it’s both fitting and tragic that Lodoss has become such a flimsy cover on a much too polished metroidvania. It’s an original IP made from stolen IP that has become its own media empire. But here it feels like the veteran grandfather who has become set dressing to his own war story. And you know, maybe, just maybe, the elf and her boyfriend aren’t SO bad. They’ve got their moments. Just like Kirito and Asuna, you want them to have their time in the cabin. And at least Deed and Parn never screw it up by having an adopted video game daughter… They deserve a better video game.