“That’s why the pandemic has been tough,” she told me over Zoom. It was early, and her eyeliner, a thick cat eye, had been pristinely applied. She laid in bed with a water bottle; “Sorry, I’m so ‘morning vibes,’” she joked.

“I love working in coffee shops, I love going to the Bryant Park library and performing academia,” Cohen said. “It’s much less glamorous when you’re depressed in your sweats like, ‘I have to send this thing in.’ I’d much prefer having a friend writing in the next room. Otherwise, if no one’s here, I just wind up like eating instead.”

What’s a performer to do when the world’s no longer a stage? Cohen is best known for her bright, buoyant sets, her full-throated cabaret, and her self-deprecation, the comedic mode that’s come to define Millennials, especially those you might call “very online.” Her bits are clearly resonant; she sang her song “Look at Me,” a kind of origin story about her desire for attention, on Late Night with Seth Meyers.

During quarantine, it’s been helpful for her to seek other outlets: her newsletter and her poems, which she started posting on Instagram in 2016. Like her comedy, which is sharp, ironic, and personal, involving reflections about weekend trips upstate and non sequiturs about her therapist, her poetry is both achingly self-aware and reaching for intimacy.

In one poem, “poem i wrote after you went down on me and called me ‘dude’,” she observes her distance from her own life, writing, “I’ve been trying / to come up with ideas for my screenplay / so I googled ‘things that happen to people.’” Just a few lines down, we’re given an earnest reprieve from all this self-analysis as she looks at a tree through her window, but the moment is fleeting, and the poem ends: “when someone hates me it hurts / my feelings of course.” The line break marks a rift between “hurt” and “my feelings,” as though her feelings are tacked on, an afterthought. This quick oscillation between vulnerability and irony underlies every poem; the effect is like scrolling through Twitter, or just joking with a friend. 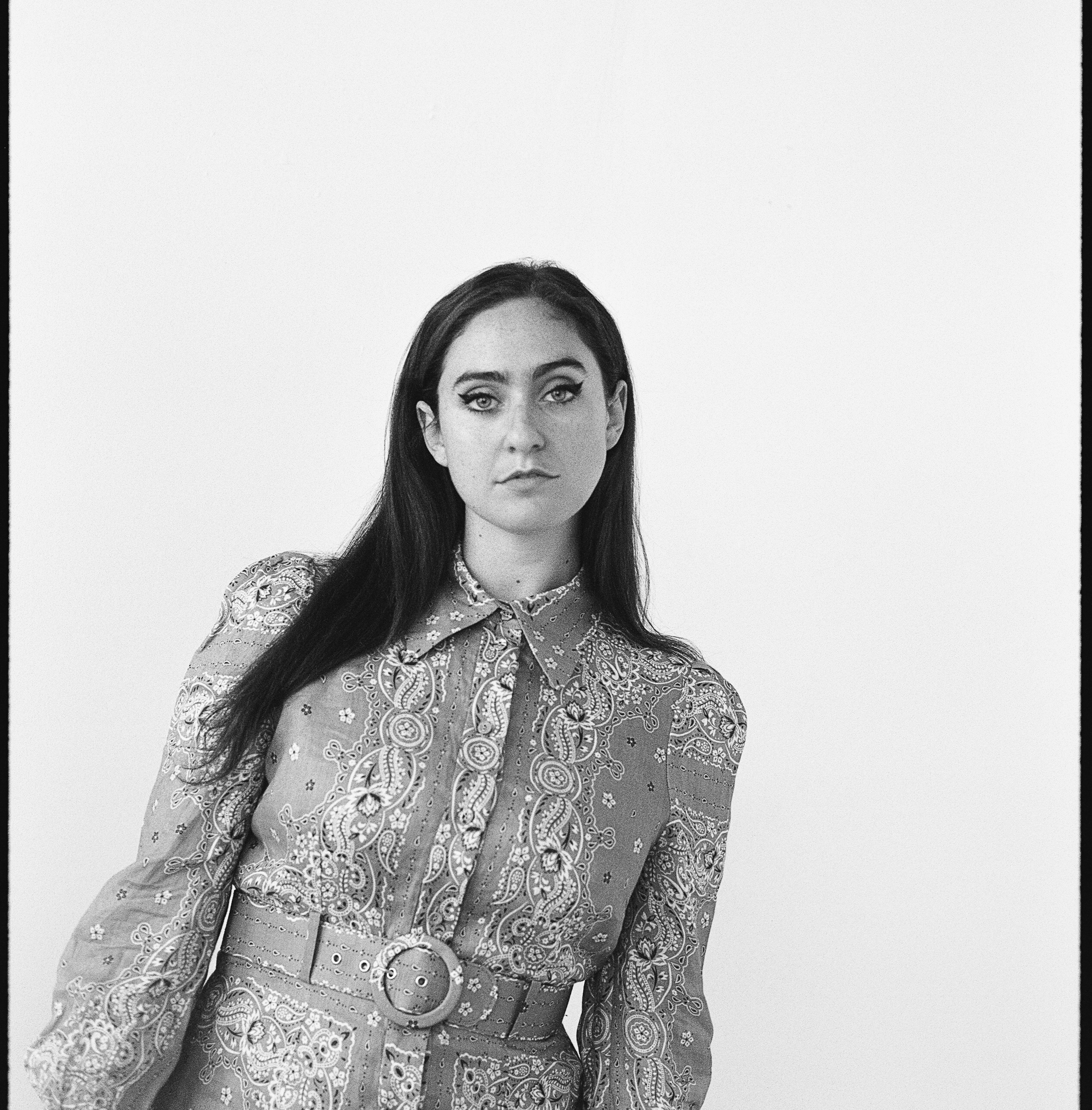 “I think poetry and comedy both are confessional often and revealing of the writer, and there’s an immediacy to it,” she said. “Being on stage, it’s like, I’m fucking going for it. And with a poem, too, there’s nothing to protect it.”

Beyond that, though, Cohen says her poems and her stand-up are separate mediums, and her influences, including Philip Larkin and Rilke, tend not to be overtly jokey, though she does appreciate Eileen Myles.

The sentiment is funny coming from a comedian. Cohen’s writing considers other contradictions, both in its images (a “gray-haired tween”) and its dramatic events (“someone who called me a cunt online / just liked my tweet about feminism”). The effect is fast-paced and disorienting, like a coruscating Twitter feed. Cohen knows something about that; she tweets often about her work, her bed, and her diet (“cant believe i feel sick after eating only olives and cold brew today……..” she tweeted. “is this a cleanse?”), and has been accused of misusing her online platform after sharing a video that insensitively attempted satire. But she doesn’t want to be billed as an “Internet writer.” Instead, she sees herself as a confessor of her own experiences, both authentic and performed, and a chronicler of modern life and its absurd pace, both online and off. 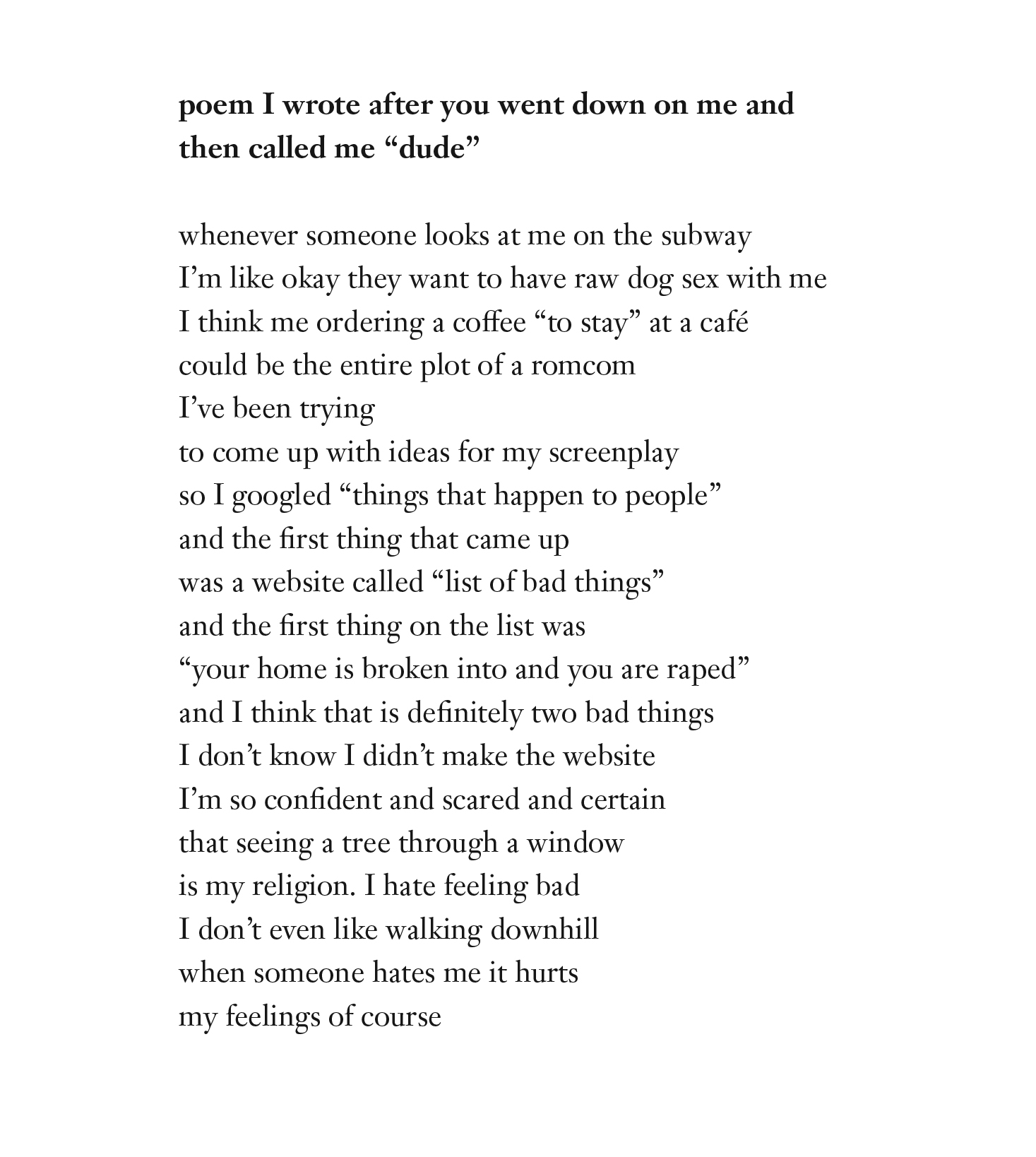 When asked about her collection’s title, Cohen said, “Anytime I’m performing personhood, that makes me feel modern. I just think modern is like, someone who’s very in their life,” she said. “There are moments where I want to feel that or do feel that.” Ultimately, her poems feel like an attempt to share those moments of present-mindedness, couched though they may be in disorienting stretches spent scrolling. There’s a joke about the word “computer,” “which already feels like a word from the past”; there are lines about getting married or waking up early “as a joke”; there’s a one-liner about “life hacks”. Cohen’s tone here is rightly absurd; how else could the mess of information emitted daily into the world be observed but with wry acceptance?

But, as in life, there are moments of sincerity that break through. In “poem I wrote after I didn’t drink for six days and thought about starting a cult,” Cohen writes, “I have a disease where I never want / to get out of the uber / because then it means I have to be somewhere.” In the throes of all that lightness, this confession shows her vulnerability—and that’s exactly the point.

“Making anything is putting something out and thinking, who will see this and feel less alone, and in turn make me feel less alone?” Cohen said. “And if people don’t relate to it, you know, blessings upon them.”

God I Feel Modern Tonight: Poems from a Gal About Town is available now at Amazon, Bookshop, or your local bookstore.