A bomb scare at the Mumbai home of Asia’s richest man led to a chain of events that makes for a thriller: political rivalry, a police officer with a troubled history, and the dead body of a suspect washing up in a creek.

It began on Feb. 25, when a Mahindra Scorpio SUV with gelatin-sticks (a cheap explosive material) was found parked outside the 27-story residence of oil and textile tycoon Mukesh Ambani, Asia’s wealthiest person. Along with the explosives, the SUV had a note for the Ambanis. “It was just a trailer. We have made preparations to kill your entire family in a blast,” the note said. The incident got global headlines and became the reason for political slugfest between two political parties.

More than a month later, none of the politicians or policemen involved in the case were willing to be interviewed. VICE World News attempts to break down the complex saga.

After security staff at Ambani’s residence noticed the SUV, Mumbai police’s Crime Intelligence Unit (CIU) arrived to investigate. The team was headed by Sachin Vaze, a police officer with a chequered past.

Vaze, 49, is reported to have killed over 60 suspected criminals in “encounters”—a term used by rights groups for extrajudicial killings in India.

In 2004, Vaze was suspended from the police force and arrested for the death in custody of Khwaja Yunus, a Dubai-based engineer, but got bail. In 2008, he resigned from the force after requests for his reinstatement were rejected by the government in the western Indian state of Maharashtra. Then he briefly joined Shiv Sena, the party currently in power in Maharashtra. In 2020, he was reinstated to the force owing to a “staff shortage due to the pandemic”. In the years he had been out of the police force, tech-savvy Vaze did a lot of things – he wrote two books, began a local language social networking site and a messaging app.

After his reinstatement as the head of the CIU, a unit primarily involved in gathering information for policing in Maharashtra, he was assigned high-profile cases, including a much-publicised Television rating scam about TV channels using fraudulent means to inflate ratings.

Vaze is currently in police custody and has not given any interviews since the controversy broke.

But the investigation into the Antilla bomb scare began slipping out of Vaze’s hands after it was assigned to Maharashtra state’s police’s Anti-Terrorism Squad (ATS).

According to ATS, the car parked at the building was a stolen vehicle with fake license plates. Authorities examined the CCTV footage to find that another car, a Toyota Innova, was trailing the SUV. The driver of the SUV parked the vehicle outside Antilla, ran to the Innova, and fled in it. Later that night, the Innova that had accompanied the explosive-laden Scorpio left Mumbai. 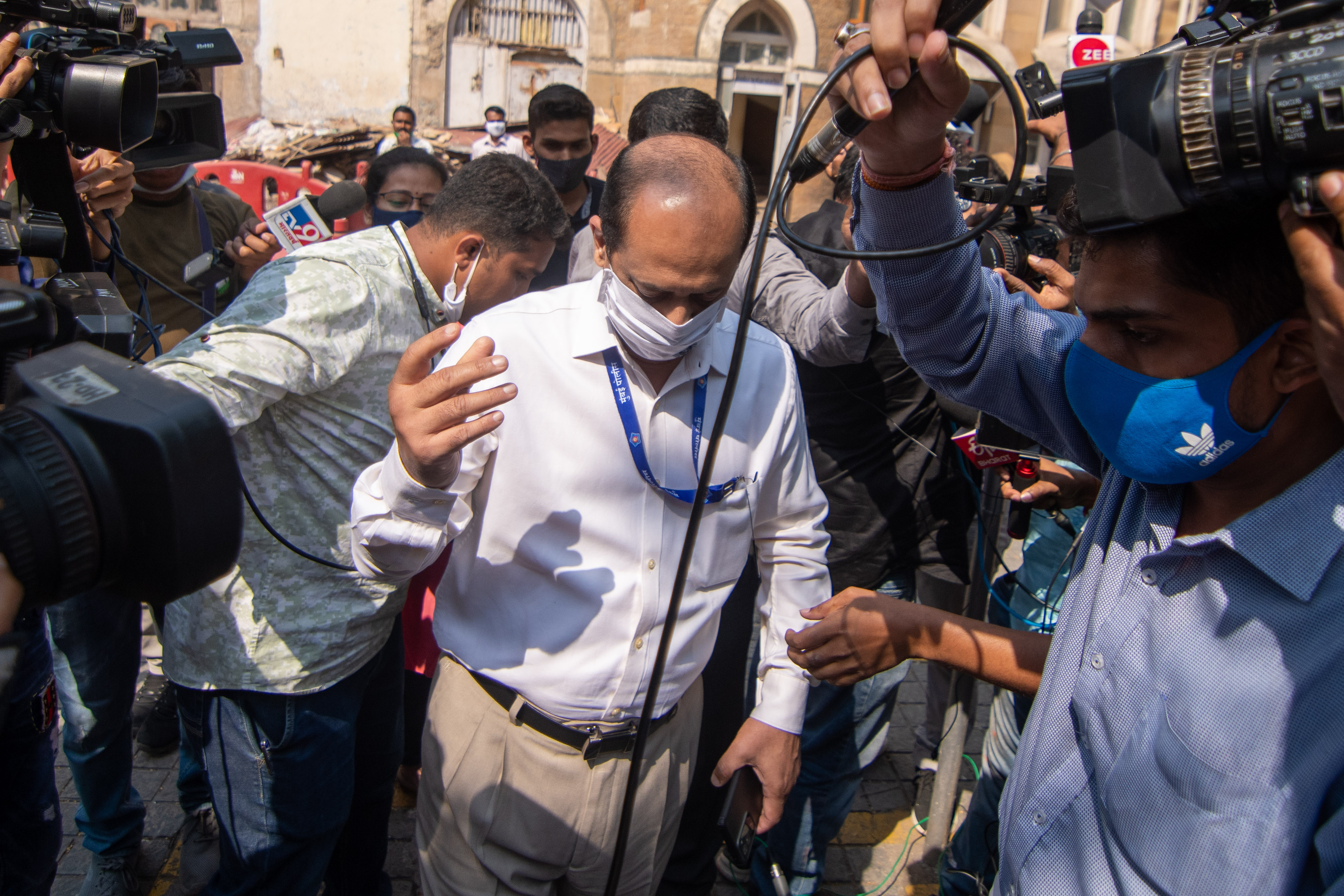 On March 8, the case was assigned to India’s premier  counter-terrorism body, the National Investigative Agency (NIA). Then it took a turn nobody anticipated. It started investigating officers from Vaze’s unit for their role in planting the explosive. After interrogating five policemen from the CIU, NIA accused Vaze of being the mastermind of the bomb scare.

Vaze was confident of not being caught, investigators surmised, because he would lead the investigation. NIA seized Vaze’s black Mercedes, where they claimed to find the original license plates of the SUV. Vaze was arrested and questioned for 12 hours over his alleged role in leading the conspiracy.

Death in the Creek

Meanwhile, the owner of the SUV had been found. He was identified as Mansukh Hiren, a Thane-based trader who sold decorative material for cars. Hiren filed a police complaint that the SUV had been stolen from him on February 18. But on March 5, Hiran was found dead; his body fished out of a creek in Mumbai.

Vaze, who had not been arrested yet, was one of the first officers to reach the spot. Police said it looked like a case of suicide, as Hiran has been under a lot of pressure after the police investigation. Officers at the NIA disagreed.

The twists and turns in the investigation complicated existing political rivalries in the state. Maharashtra’s ruling Shiv Sena and India’s ruling Bharatiya Janata Party (BJP), once allies in Maharashtra, had a bitter breakup in 2019. Shiv Sena joined forces with BJP’s biggest rival, the Congress party, to gain power.

Lingering political bitterness resulted in the two sides being at each other’s throat on most issues: s probe into the death of Bollywood actor Sushant Singh Rajput, the demolition of the bungalow of Narendra Modi supporter Kangana Ranaut, and most prominently, the arrest of pro-BJP news anchor Arnab Goswami.

Now, BJP has accused his rival political party of being associated with now under-investigation cop, Vaze.

On March 25, Vaze was charged with the Unlawful Activities Prevention Act—widely used against those charged with terrorism, sedition and political dissent. The man who was once chasing down terrorism suspects and killing them in police encounters was now himself labeled as a terrorist.

All it took was a bomb scare at the home of India’s wealthiest man.