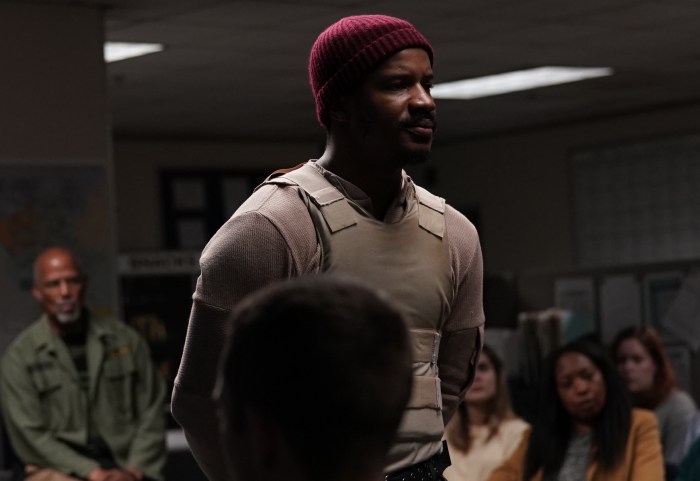 The stars of a provocative drama are breaking down the film’s complexities with a networking hub for Black creatives. The stars of “American Skin” including its lead actor/ director Nate Parker are joining in a Clubhouse conversation about the layered story that follows a Black Iraqi War Vet who, after being denied a fair trial following the shooting death of his teenage son (his only child) by a white police officer, desperately seeks justice and accountability for his son’s death.

Nate will be joined by fellow film stars Omari Hardwick, Theo Rossi, Shane Paul Mcghie, and Milauna Jackson during the conversation on invitation-only audio-chat social networking app Clubhouse. Taking place Saturday, February 27, the chat will be hosted by Free The Vision, the founder of All Black Set, the network and resource hub of Black creatives involved in all aspects of production.

During the exclusive chat, the stars of “American Skin” will detail their creative process, the production process, the film’s social depth, and the importance of inclusivity and representation in cinema.

It will particularly interesting to hear from Parker who personally visited Ferguson, Missouri following the death of Mike Brown to see firsthand the tensions between law enforcement and young men and women of color. After better understanding the complexities, he used his experience to fuel “American Skin” with a core purpose to preserve lives.

“The most tragic moment of this trip arrived when I stood downtown between two infuriated groups of citizens,” said Parker. “From one side came yells of ‘Justice for Mike Brown’ and on the other ‘Support Our Police’. It became clear to me, instantly, the disconnect in our understanding of citizenship, law enforcement, and our responsibility to preserve American life.

As an American citizen, father, brother, son and artist, I felt compelled to use my platform as a filmmaker to respond to this crisis in a way that could not only promote social equity, but initiate a global culture shift that can result in the preservation of lives. If saving one life is the only thing this film achieves, it will have served its core purpose.”

To hear more from Nate, and the rest of the “American Skin” cast, log onto Clubhouse Saturday, February 27 at 7 p.m. EST/4 p.m. PST.